Having watched the weather forecasts for the past few days I was anticipating clear skies and light winds for the trip up to Lake Mungo Lodge NSW.
Peter Anson had called me from the Lodge having arrived friday and reported good conditions so it was on.
A nice big high and a promise of clear skies beckoned. However the area 51 forecast predicted fog patches about the Mt Lofty ranges and the eastern border region, and sure enough as I drove towards the
strip at Callington, there was low fog enshrouding the valley.

Contemplating a delay getting away I was heartened to see a light northerly breeze had cleared the air over and to the north of the strip.
Wasting no time I stowed my gear and performed a quick daily check, preflight and fuel dip, having done a more comprehensive check the previous friday afternoon.
Giving my taxi and departure calls I noted the common frequency we use under the YMBD (Murray Bridge) CTAF was curiously silent.
Airborne on a beautiful saturday morning, I looked east towards my intended track over YMBD and was greeted with a wall of ground fog as far as the eye could see to the north, east and south!
Mmm no wonder the radio was silent..!
OK plan B fly towards Loxton to give time for the wind and sun to clear the fog.
30 minutes later as I tracked towards the Riverland I could see patches opening up, clearing the way towards YLOX (Loxton) airstrip.
Cruising at 3500′ it appeared the fog had lifted to 1500′ so I decided to duck under and descended in an open area for a look see.
Bumping along at 1200′ it was a bit uncomfortable. I didn’t like the idea of passing through the Loxton CTAF at circuit height with other aircraft about, so I circled back and climbed back up to 3500′
The extra time taken to loiter about meant the clouds had cleared a bit more over the track to YLOX and it was clear ahead to Wentworth. 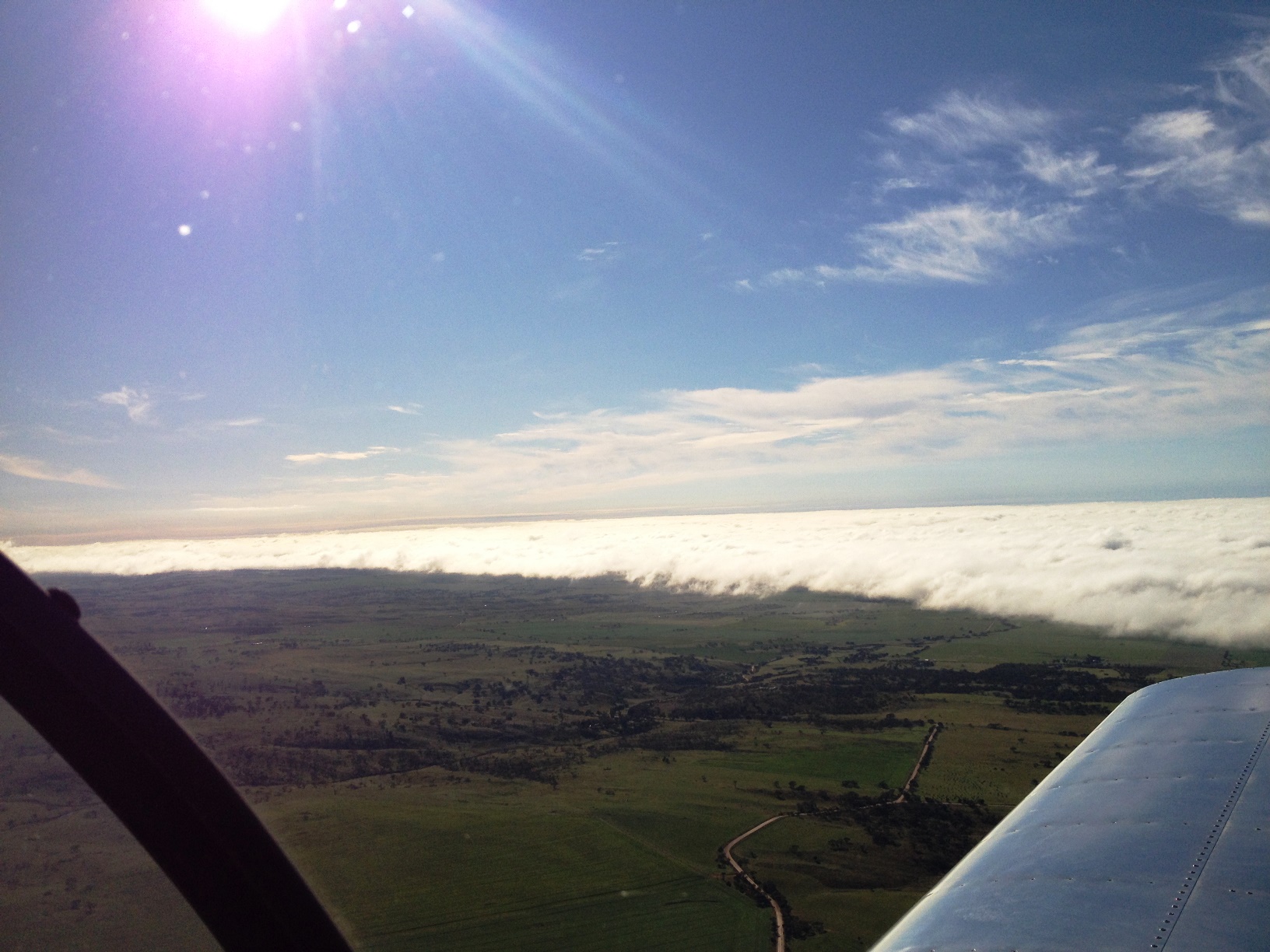 Great wall of fog on climb-out from Callington SA. AS far as the eye can see across intended track! 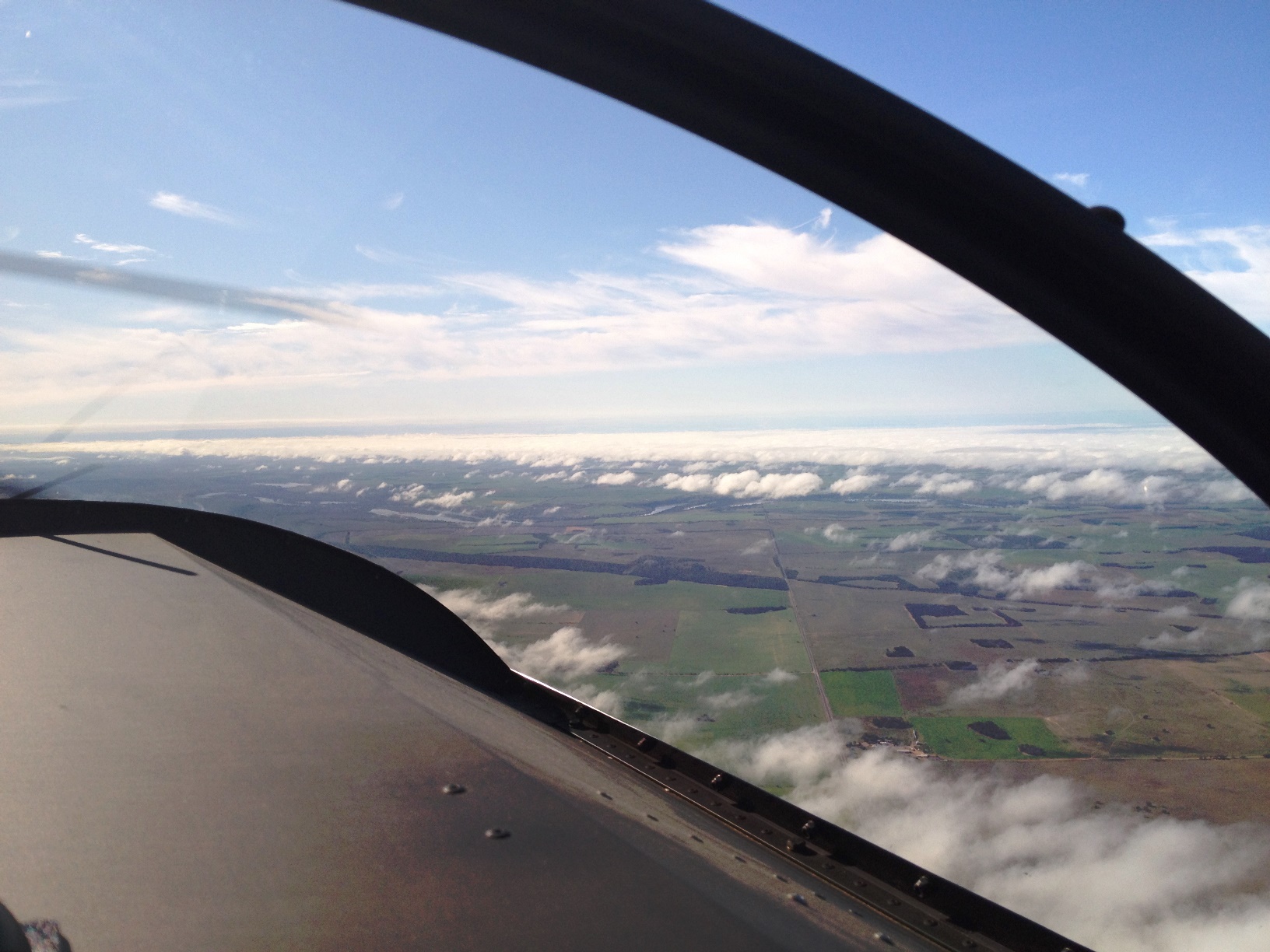 Tracking north along the edge, starting to beak up. Started to veer Easterly past Black Hill in the distance. 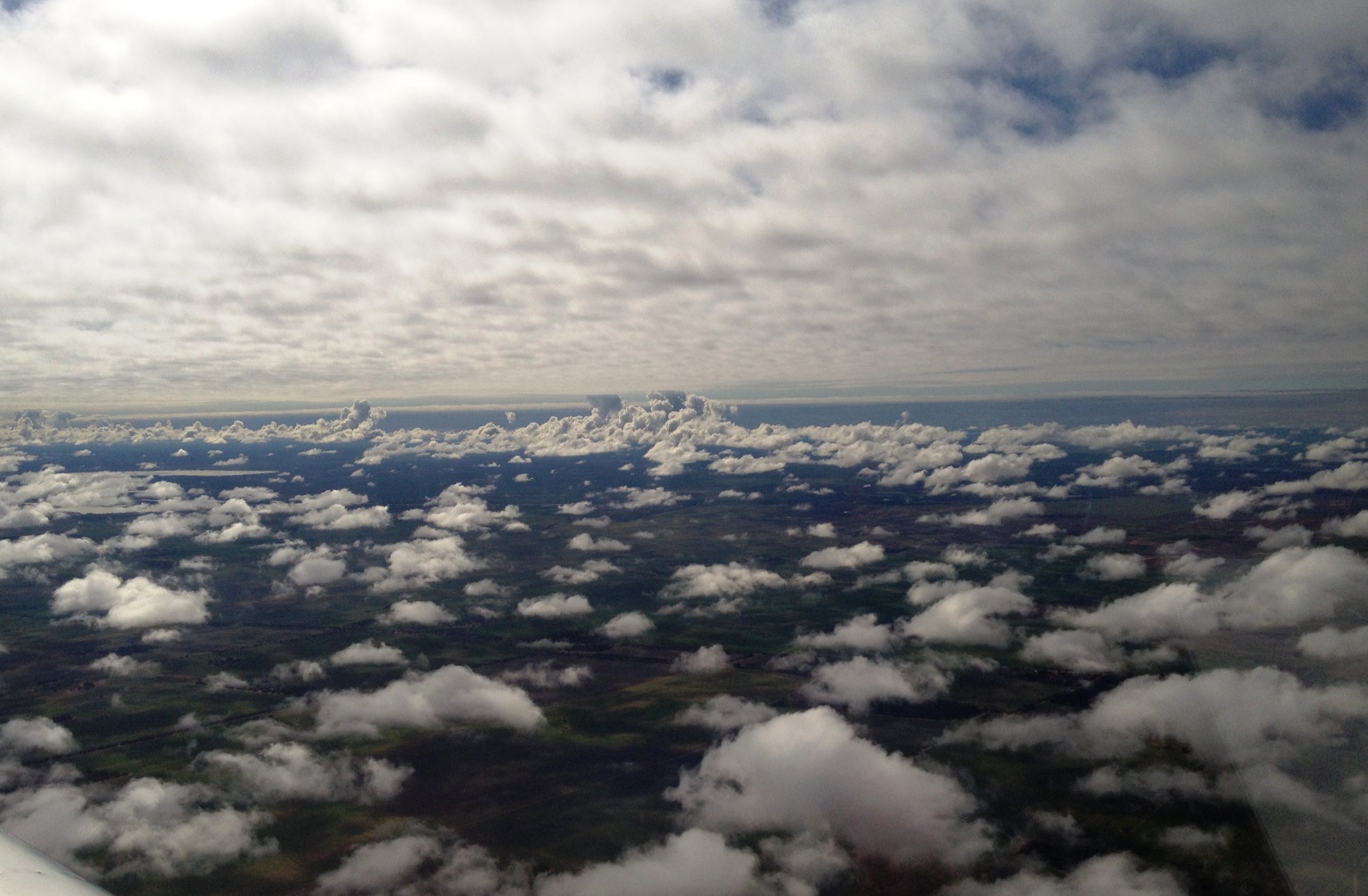 Clouds punching through the top stratus layer. Cruising at 3500” towards YLOX. 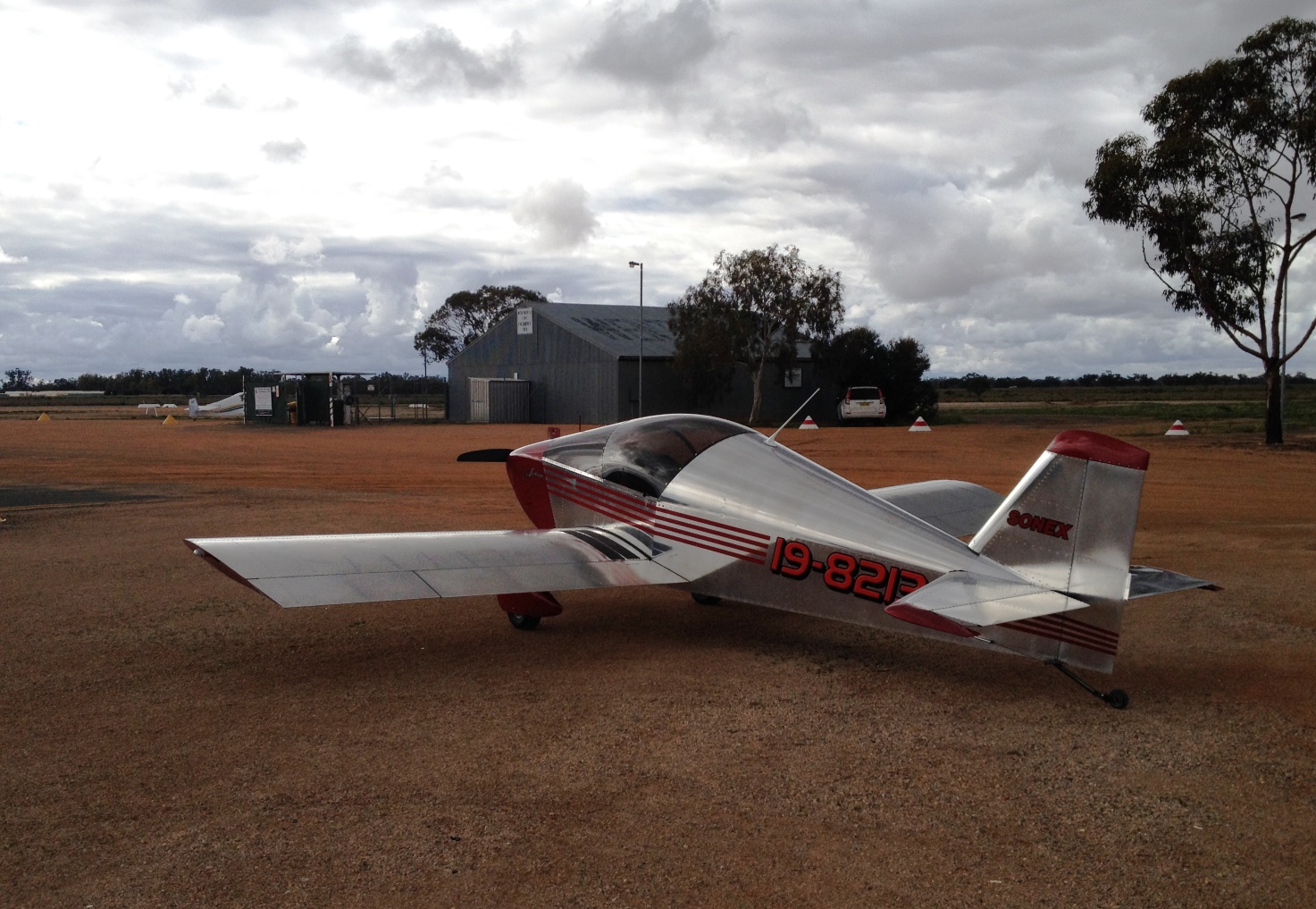 Refueled and ready to go after a lunch break at Wentworth.

Arriving overhead YWTO I checked the windsock and adjacent signal area, no big X so all good and with no wind to speak of I descended for a landing on 26.
Refueling at the card swipe bowser I topped up with 32 litres. Doug from the Sunraysia Club came over to greet me and offer a cup of tea so I made my way to the Sunraysia clubhouse with my prepacked
lunch and a welcome cuppa. Home base was informed by text of my safe arrival.
Lunch done I fired up for the last 60 miles to Mungo Lodge. Dark clouds were starting to gather overhead and to the north east, I was beginning to wonder if I’d be dodging showers on the way.
The country ahead was scrub but I was surprised to see some large swathes of cultivated land in amongst the bush either side of track. I tended to veer over those not relishing the idea of landing
amongst trees should any thing go wrong.
Arriving in circuit the friendly greeting voice of Peter "Unicom" Anson came over the radio to advise of the strip and wind conditions. Runway 16 selected I descended for the landing and on late final
spotted Peter at the edge of the strip to photograph the arrival. Mmm no pressure, no bounce please!
Aircraft secured Peter gave me the cooks tour of the Lodge, our lodgings for the evening were in the dormitory rooms. No fuss and pretty basic but thats all you need for an overnighter. Extra blankets
were on the bed to supplement the sleeping bag. I slept very comfortably.
The main restaurant area has a large open fire and comfortable leather seating area. After checking in and making a phone call to home to let my wife know I had arrived safely, (there is no mobile or
wifi coverage at the Lodge) we sat down with coffee and tea in hand to await Doug and his enterage Mark to arrive from Goulburn.
Some time later we ventured out to be greeted by a familar Jabiru roar.. ok buzz.. and Doug Mclean’s yellow Sonex hove into view.
Followed a few moments later by Mark Howlett’s mighty Jabiru (honorary Sonex).
Greetings and tie down duties over we adjourned to the BBQ area for refreshments and chin wagging.. however without sunshine this didn’t last too long so the fireside chairs became the location of
choice until dinner. 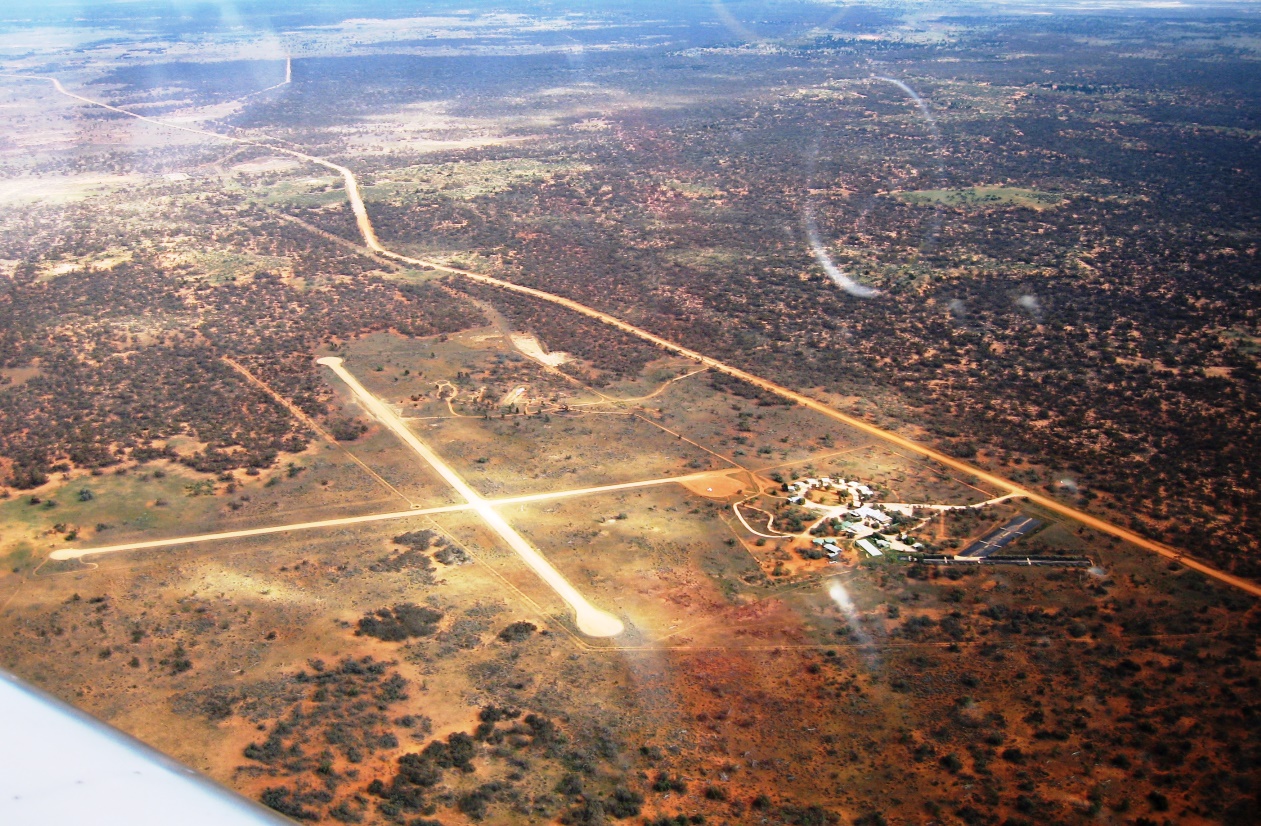 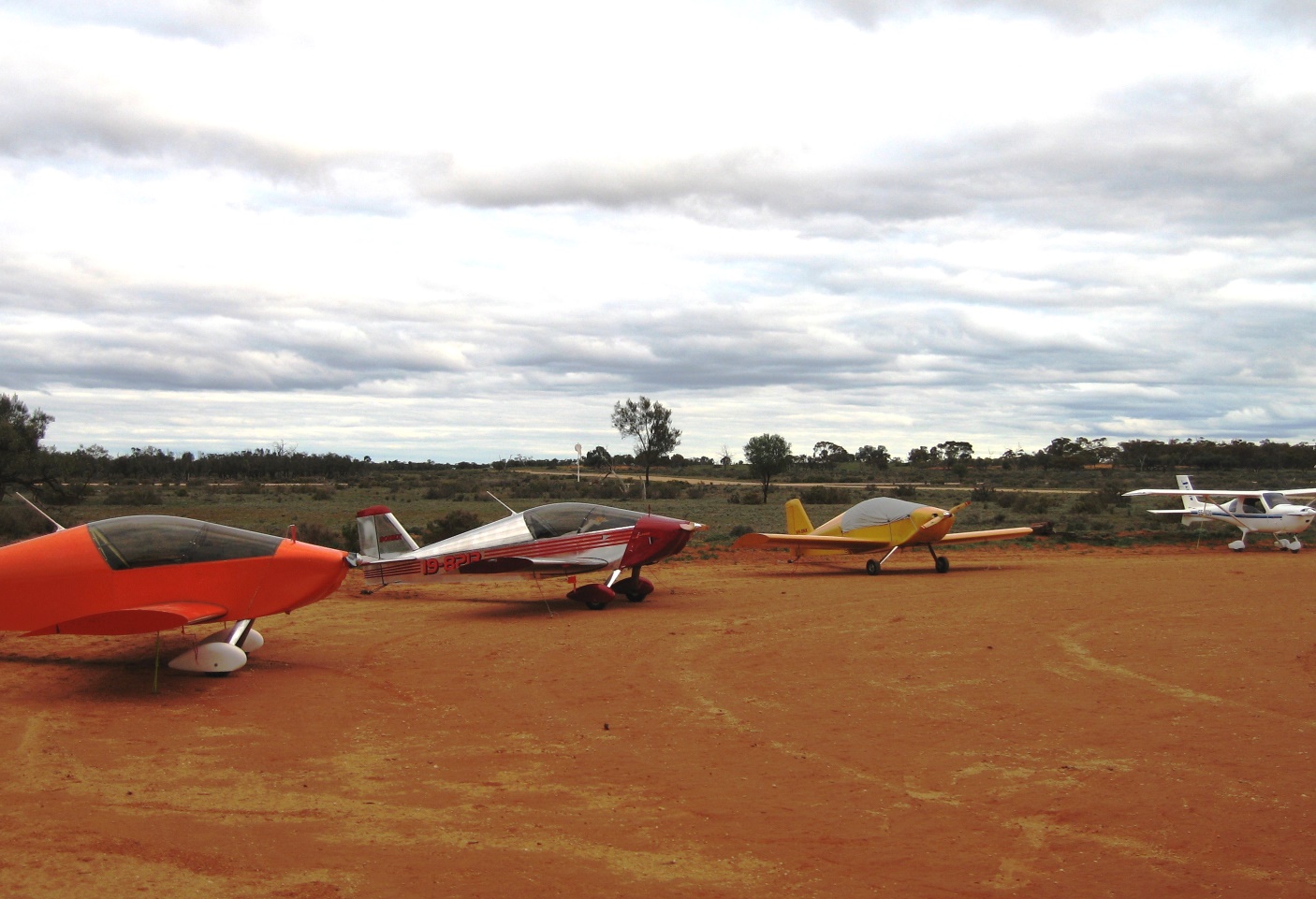 Babies tied down for the evening. I had an emergency poncho laid out in the cockpit in case of rain!

The evening menu had good selections, all quite reasonable considering the remote location of the Lodge. I settled for the steak, followed by sticky date pudding.
Sunday morning dawned overcast again but there was a light breeze from the north, promising to clear the skies later.
Breakfast of eggs, bacon and toast over we decamped and headed out to the parking area to load and prepare for our respective journeys home.

The plan for departure was to do do a lap around the Lake Mungo rim at 1000-1200′ once airborne. I took a few photos but the details of the sand dunes and Great Wall of China dont show up too well.
Lap over I circled around to climb and depart overhead the strip, setting course for Wentworth and a refuel stop.

My arrival, ably photographed by Peter Anson. Glad he didn’t have the video on. 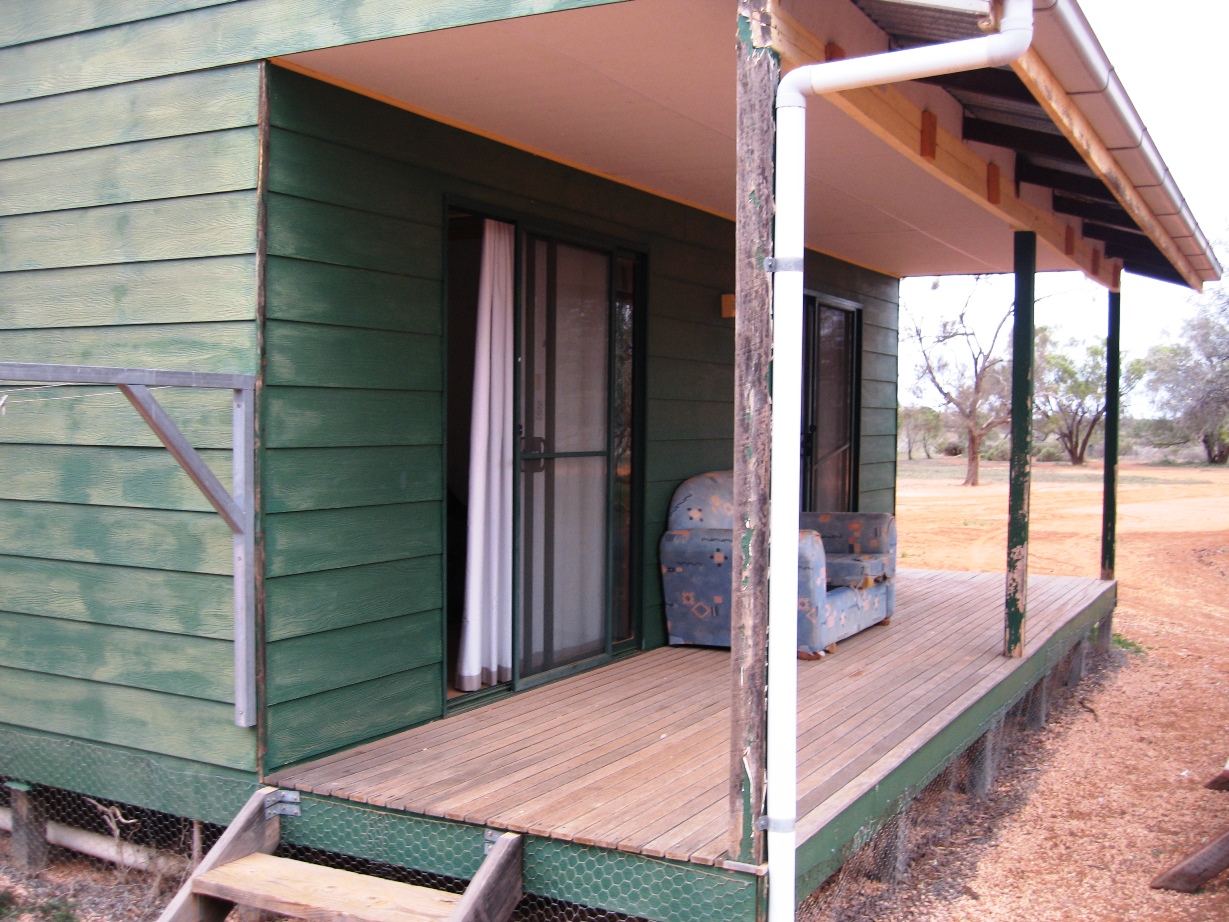 The evening lodgings, looks in need of paint but didn’t notice it when I was sound asleep later. 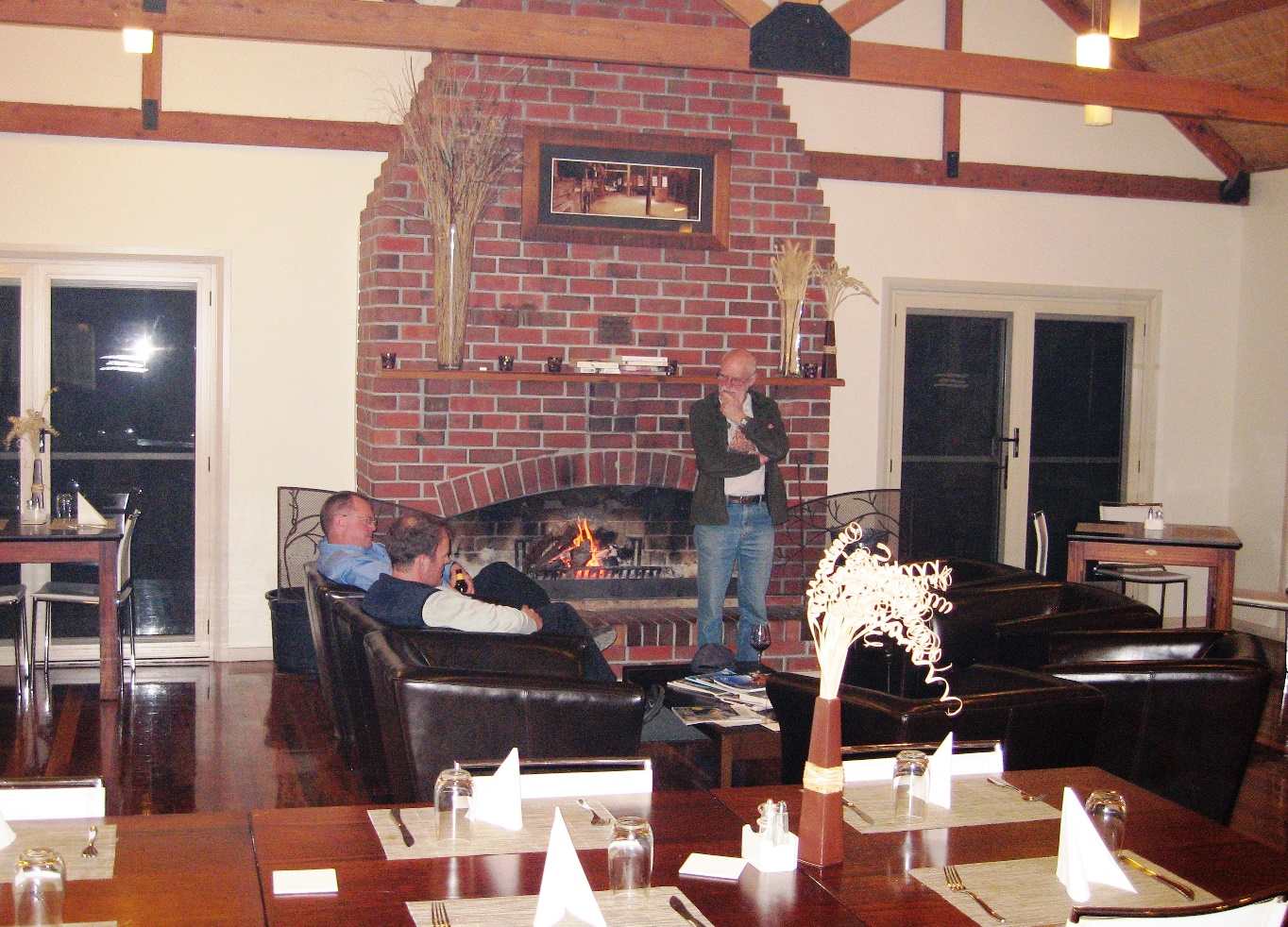 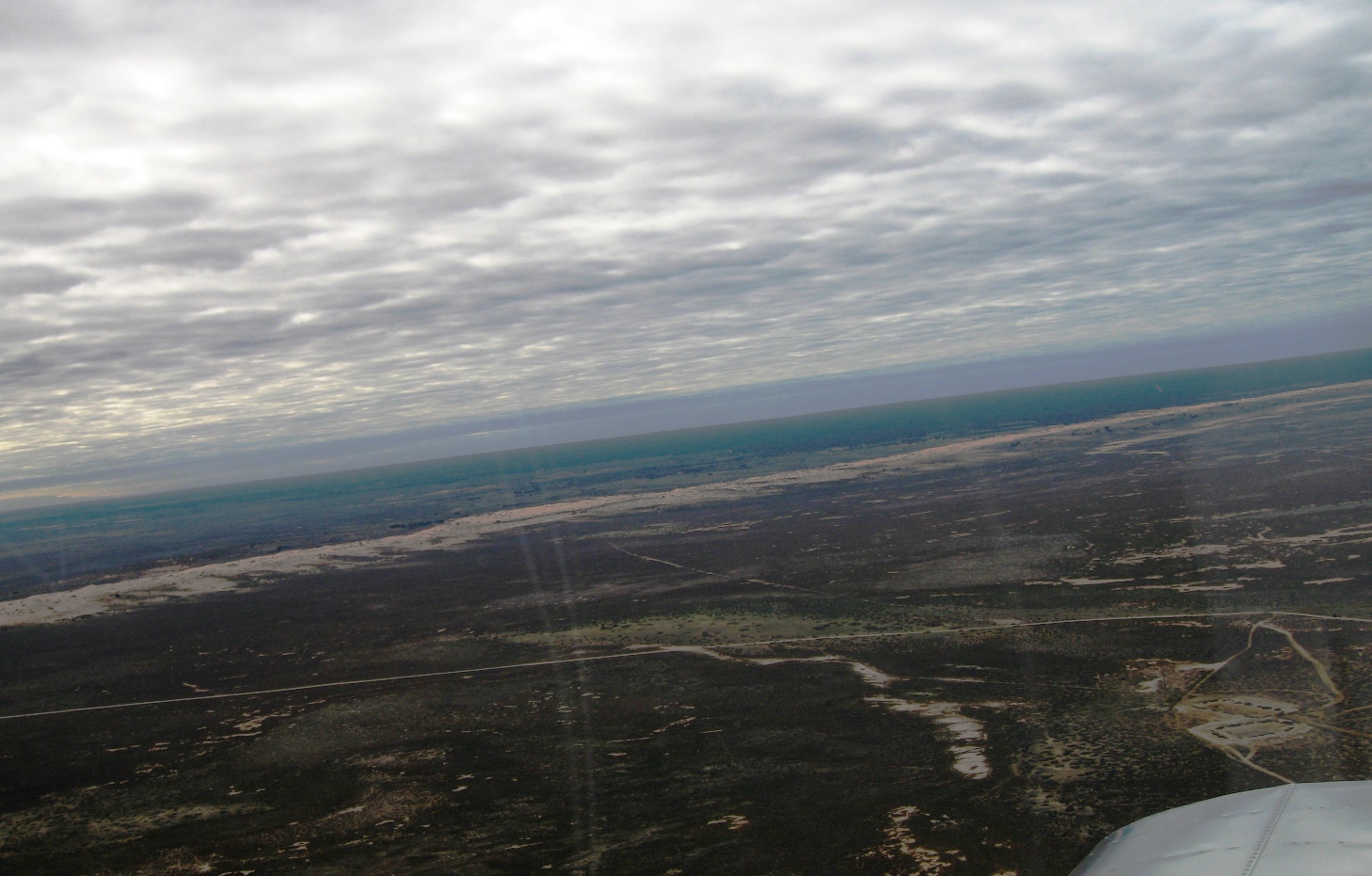 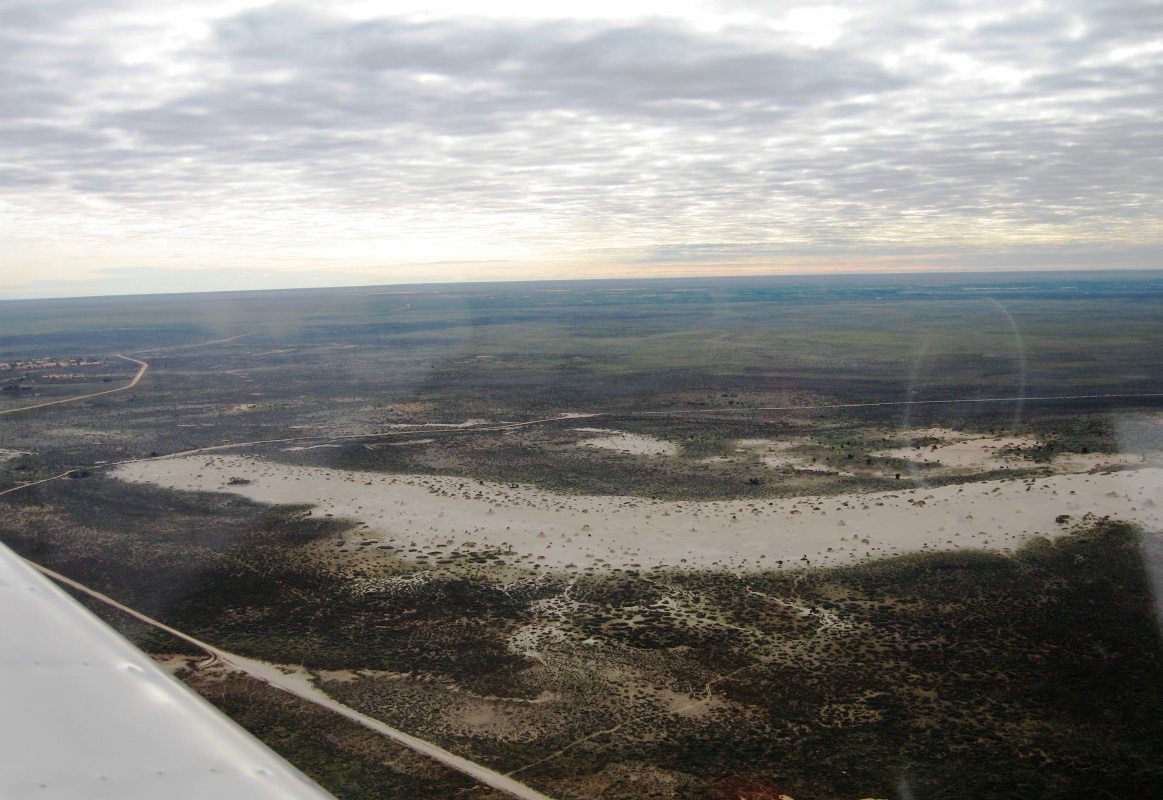 more of the dunes, the detail is lost with the distance. Didn’t want to go lower than 1000′ agl though. 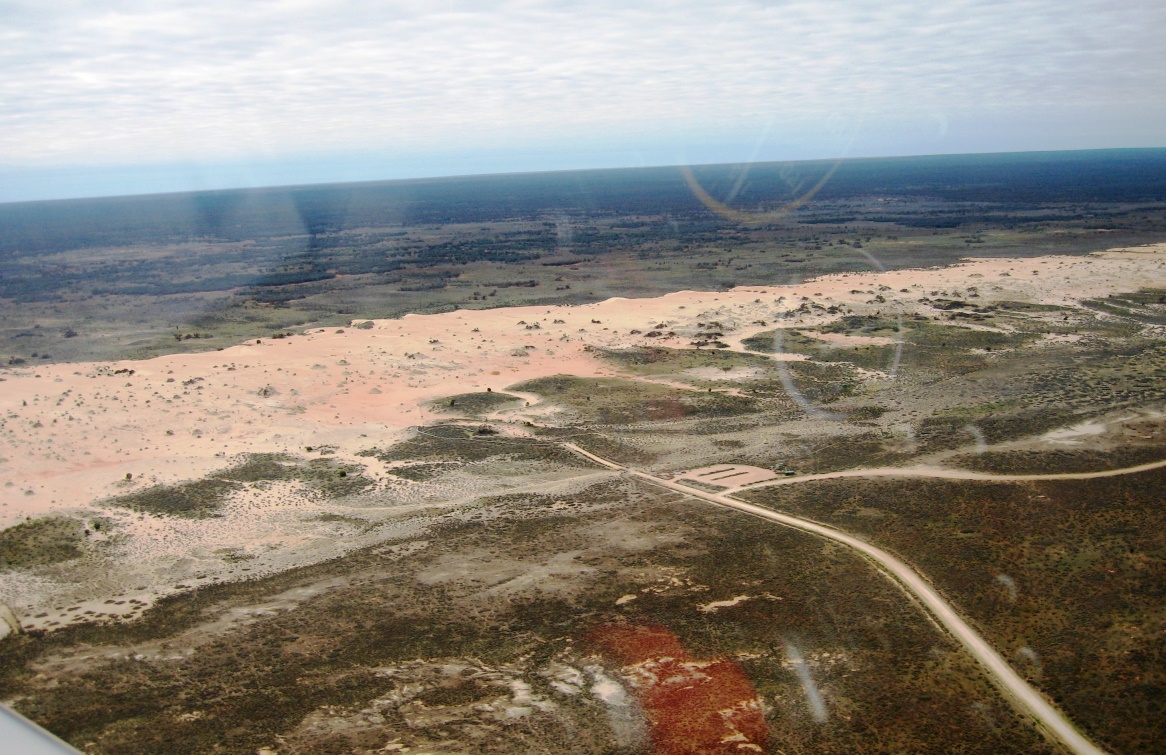 One of the visitor area parking bays.

The skies to the west appeared to be clearing and I could see suspicious wind lanes on Fletchers Lake 10 miles out from YWTO. Mmm forecast northerlies looked like they were getting up.
Arriving overhead YTWO the windsock appeared to be straight out, but fortunately blowing straight down 35. With a 15 knot headwind I almost managed to pull up at the 35/26 intersection but I was
carrying a bit more speed on final for the gusts. I spent all of 20 minutes on the ground to fill up and visit the mens room before heading off again. 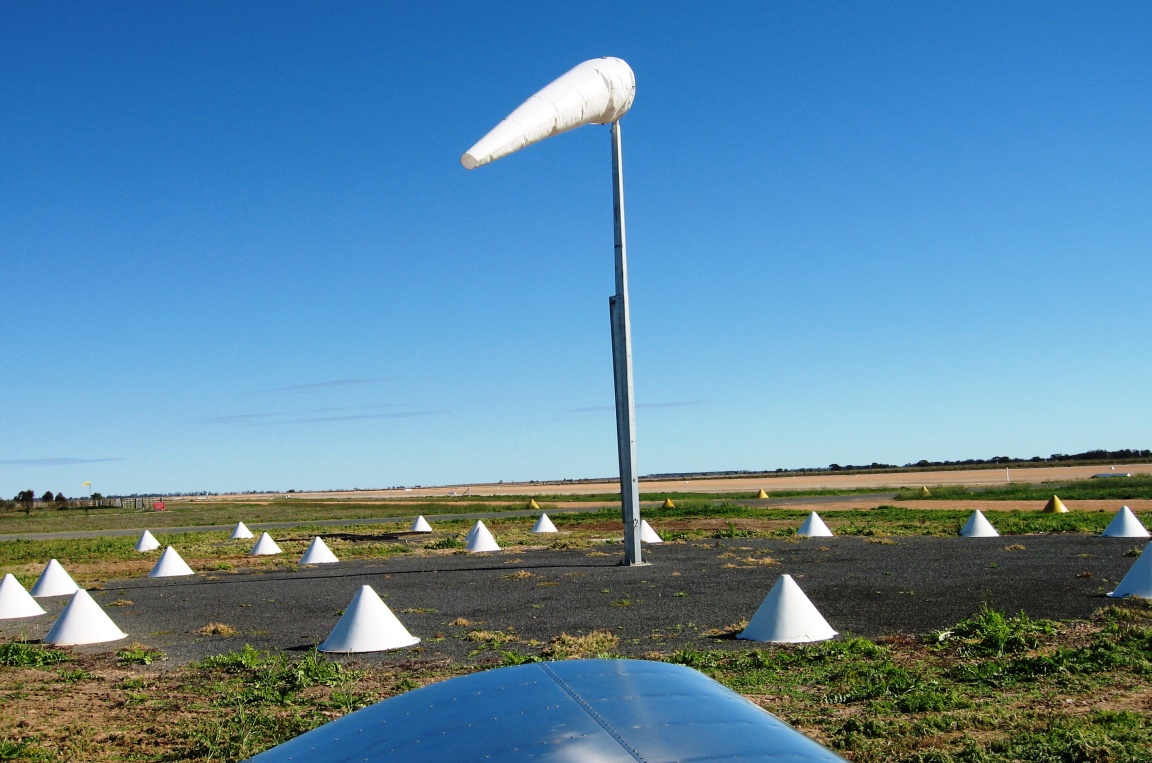 At YWTO on the return trip. Wind dropped a bit for the photo. 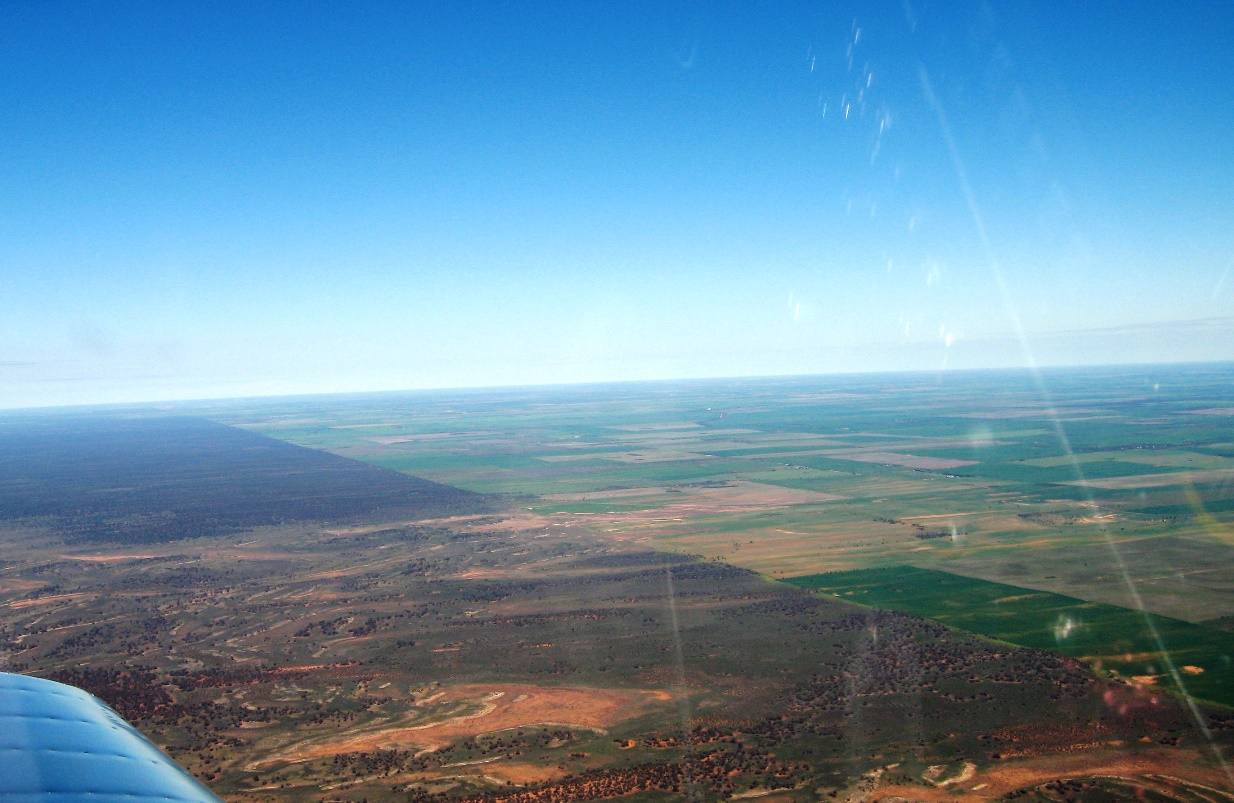 Crossing the Vic/SA border. Note the cultured landscape on the SA side. 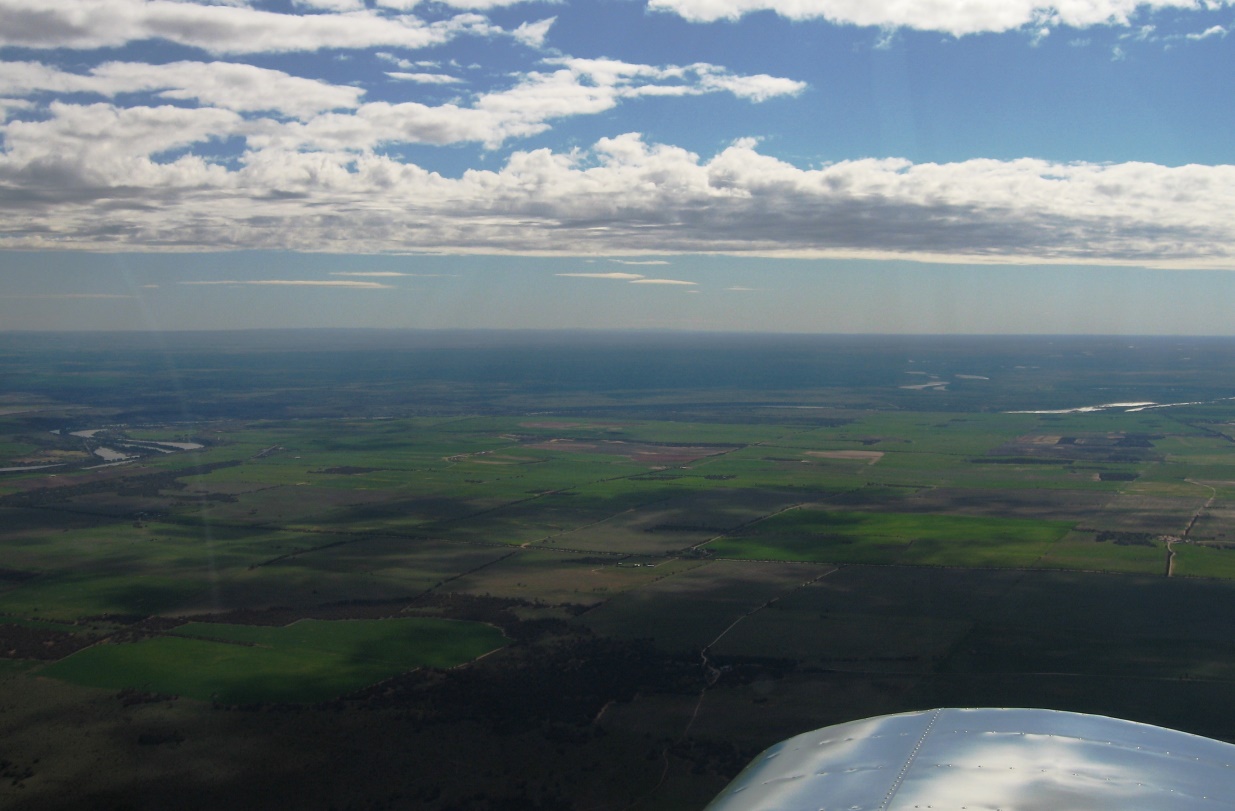 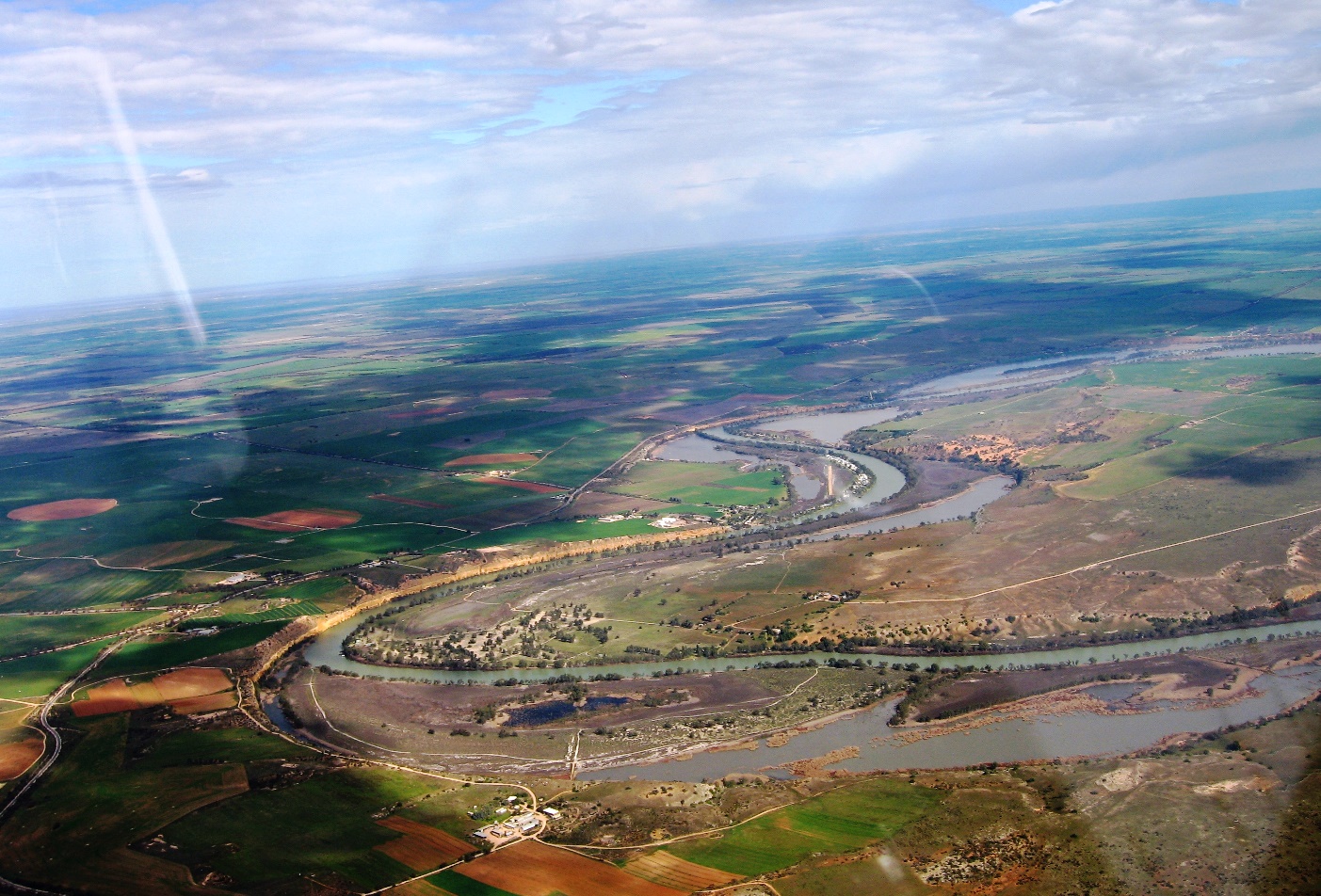 Chucka Bend/Bow Hill on the Murray, not too far from home now.

Venturing skyward again I climbed to 4500′ for the trip back to Callington. Clear skies and warm sunshine through the canopy led to a noddy moment near the Vic/SA border, not want you want when you are
flying a Sonex lol. So vents open to freshen up. With OAT of 3 degrees it didnt take but a moment.
Clouds were noted in the distance over the Mt Lofty ranges, so it looked like the pre-front weather had arrived. A few bits of virga here and there.
Arriving overhead Callington the windsock wasn’t as bad as I thought it might be, maybe 8-10 knots down runway 34.
Turning final 34 the wind had shifted slightly to the right, but no problem and a smooth rollout on the green grass of home followed.

Shutdown and pack "The Precious" away after another successful fly away, remembering to text everyone that I was back safely.

3.1 hours (Hobbs) for the trip up, with the fog diversion to Loxton.
3.0 hours, for the trip home including about .4 flitzing around Lake Mungo
Total fuel used approximately 98 litres. Average fuel burn 16.4 litres per hour.