SonexAus – Steve’s Sonex 892 began building my sonex in March 2009 and made the first flight myself on the 5th August 2010. I haven’t got a clue on how many hours it took to build. I do know it took 15 months from opening the first box until the C of A was granted. 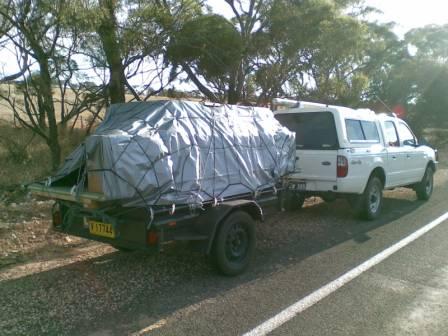 One complete sonex kit loaded on my 7 x 4 trailer
I bought the kit from the original buyer who had been storing it for a few years. No construction had been started before I bought the kit. It came as a TD, centre stick, with aerovee mount and cowl. I swapped the engine mount with another builder who had a TD 3300 mount. I modified the universal cowl to suit the 3300 by narrowing it at the front. 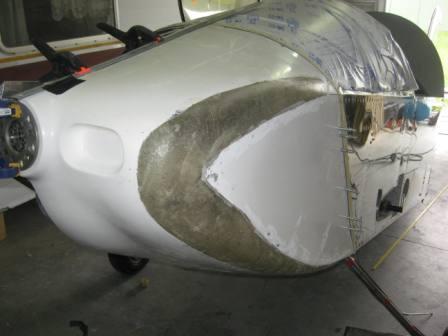 The aircraft is just a standard Sonex with the exception that the fuselage skins were flush solid riveted. The floor skins and all of the internal bits are pop riveted as per the plans. I was planning on flush solid riveting the wings also but changed my mind after a couple of slips with the rivet gun whilst riveting the turtledeck. I decided a non dented, pop riveted wing would look better than a flush riveted wing with dents
.
As for modifications I couldn’t help myself and made a few minor ones.

Fuel system. Gascolator bracket is welded to engine mount instead shaking around on the firewall. The fuel valve is mounted on the firewall with a shaft extending back to just under the dash so I can reach it whilst strapped in. I’m now working on adding some more fuel capacity. I have also stayed with using the bing and haven’t had a problem with it. Just a little extra work is required if using the bing. An airbox and carb heat set up needed to be squeezed in. 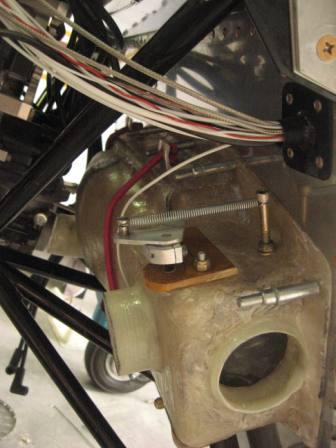 Canopy. It’s mounted sandwiched between strips of aluminium with bolts. I copied Adrians Gas strut on the canopy to get rid of the wire rope restraint. I did the entire canopy install by myself. A 4” and a 5” angle grinder were the only tools I used for trimming. A cutting disc in one grinder and an 80 grit flap disc in the other to bring it down to the final shape. I used plexiglas drills for the holes. So far after 30hrs of flying no cracks have appeared in the canopy. I hope it stays that way. 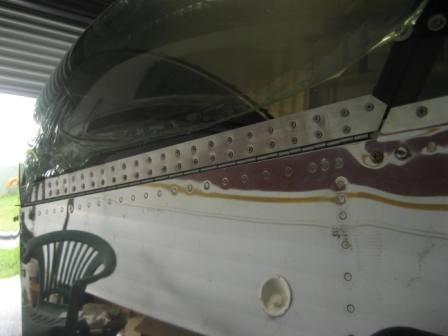 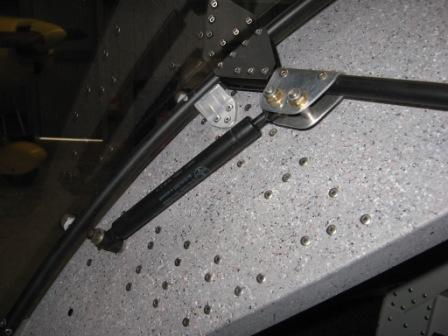 Brakes. After almost 20hrs of flying I decided to replace the drum brakes. Great plains disc brakes were installed. The drums sort of worked on flat ground and for taxying, but any downhill braking, forget it. They would fade real quick. If you want to match the advertised stopping distance, discard those drums and buy some discs. There are other brands of brakes around that will do the job just as well, but I had used the greatplains brakes on my last plane and knew they would fit without major changes to the spats etc. The disc also bolts straight on the standard wheels. The same handle used to operate the original brakes now operates the master cylinder. I may modify this and change to toe brakes later. At least now it can stop in the same distance that it takes to get airborne.

Propellor. I designed and made my own prop. Well I’m not really clever enough to do the design work. All I did was punch some figures into a prop design program until it gave me the diameter, pitch and shape I wanted. I’m really happy with the performance. Equal to what I think a sensenich would do. 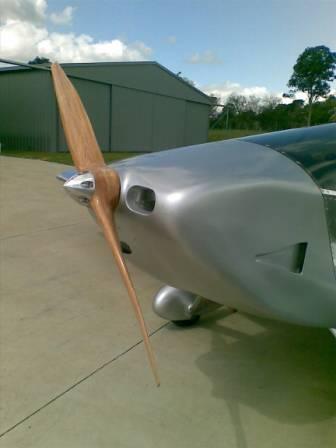 with the latest prop

The plane now has just over 30 hours on the clock. The plans are excellent, much better and with more detail than any others I’ve seen. I really did enjoy building it, but flying is this thing is far more fun. 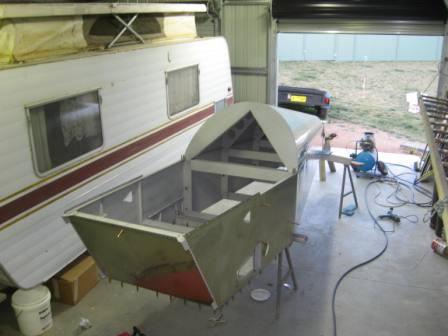 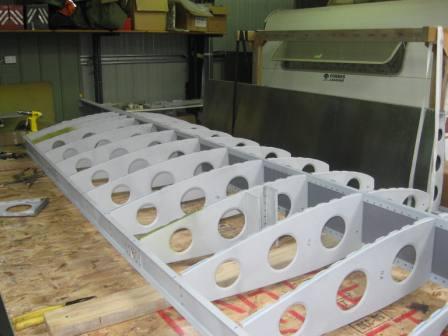 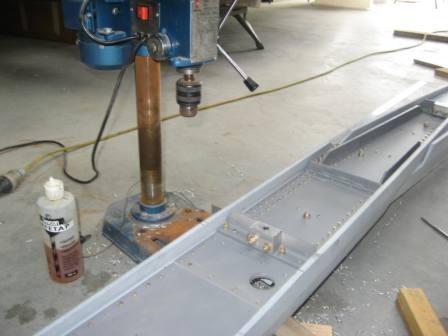 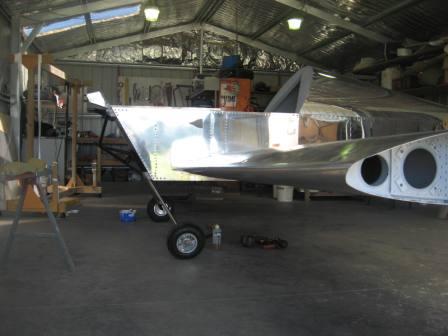 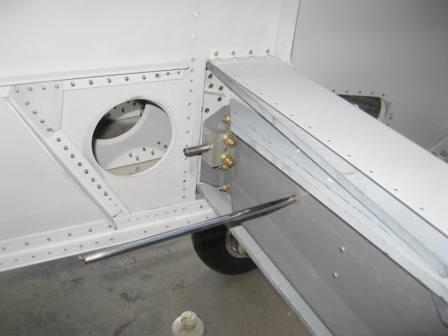 Wing rigging day
I used the same method as the one described by Peter Henry for rigging the wings with the help of fellow builder Adrain Clout. The completed spars were bolted together Ithen used a drill press to keep the holes straight and take the attach fittings up to 3/8". The only difference to the Bill Seargent method is I used a 3/8" OD x 1/4" ID steel bush as my drilling guide and used a long 1/4" drill as the pilot drill through the front angle when rigging. Then pulled out the guide bushing and drilled with a long 3/8" bit. Then clecoed in the rear angle and did the sequence in reverse. From the front through the rear angle with the drilling guide bush in place in the front hole and the spar. Probably not the best explanation but easier done than said. I’m not recommending you do it this way but If I was doing it again I would definitely do it the same way. 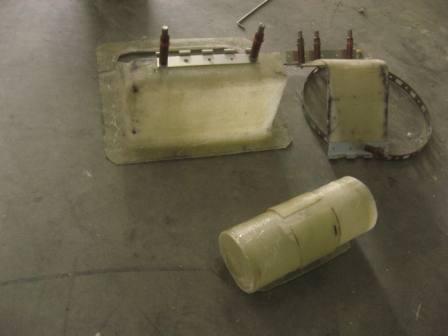 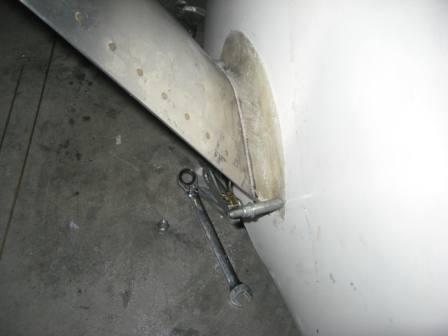 Battery box and oil separator Fibreglass fairings for the wheel pant gear leg junction
A few shots of my solution of another place to stuff some more fuel.
Behind the seat and under the crossmember. It holds 32 litres and weighs 6lbs, possibly could have weighed a little less if I’d been a bit tidier with the proseal. It feeds directly to the engine via a pump to a 3 way valve and can’t be transfered to the main. Its portable and is held in place with a piano hinge each side. The pump, aluminium fuel and vent lines and the piano hinge are the only permanent fixtures. It takes about 5 mins longer to install or remove than it takes to remove the seat. 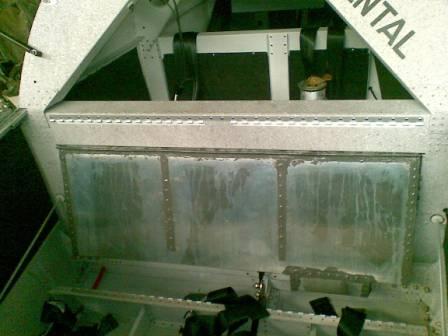 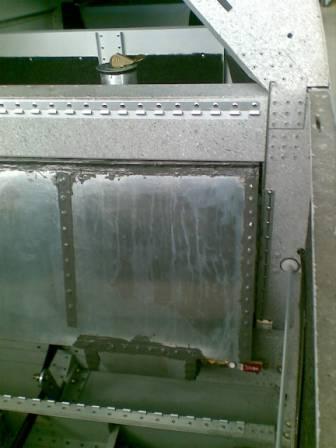 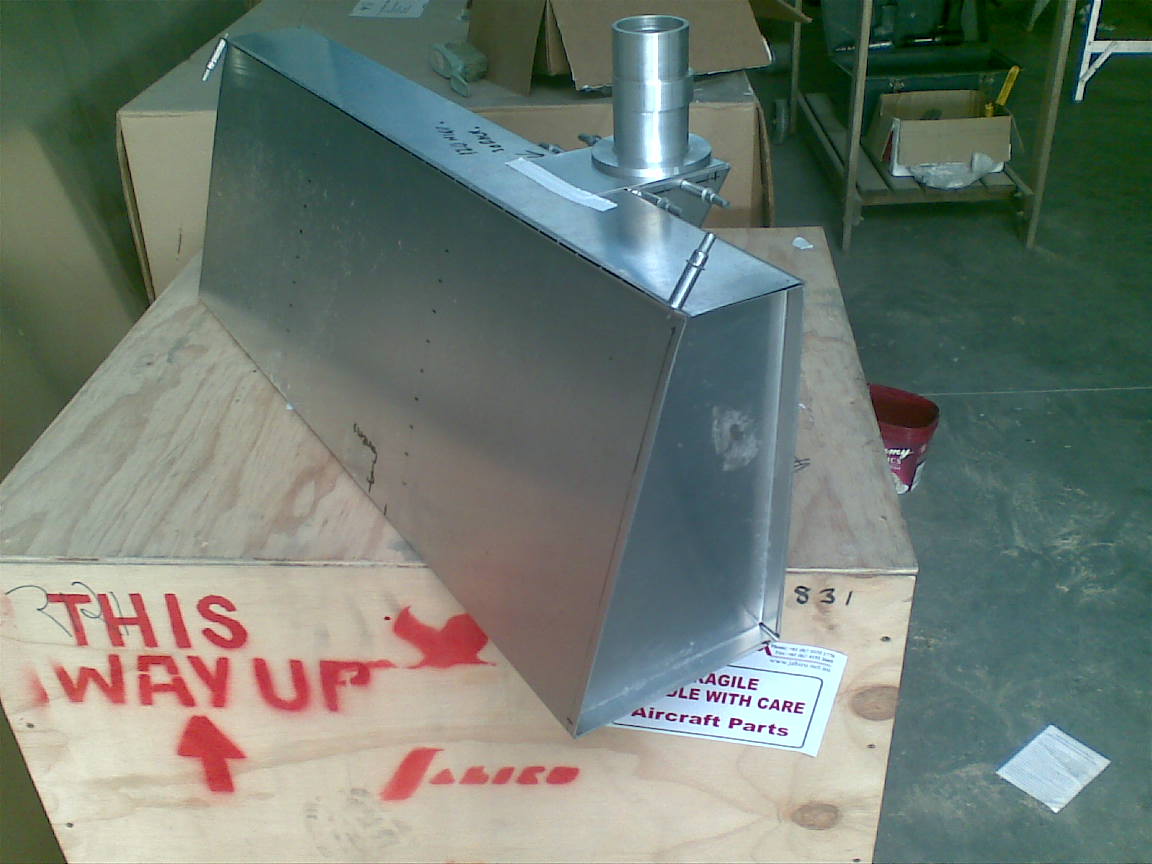 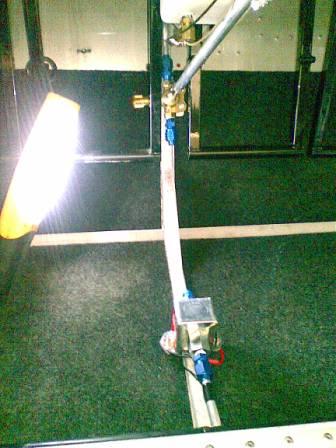 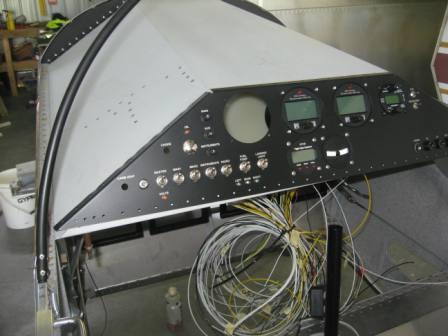 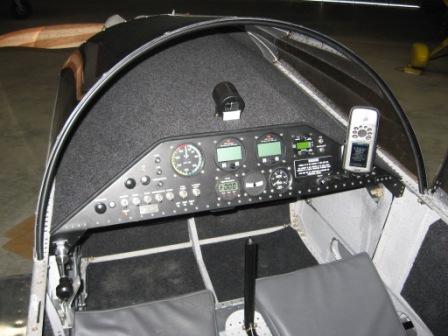 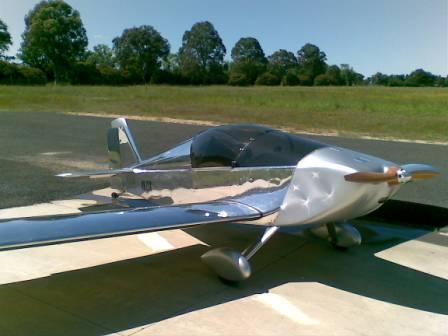 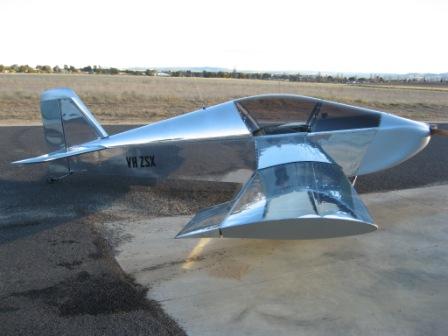 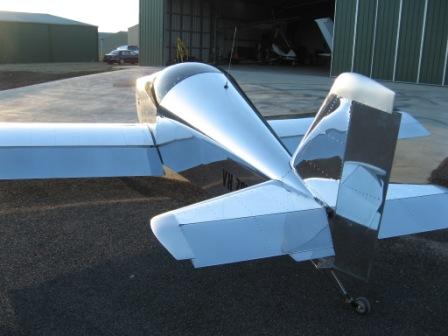 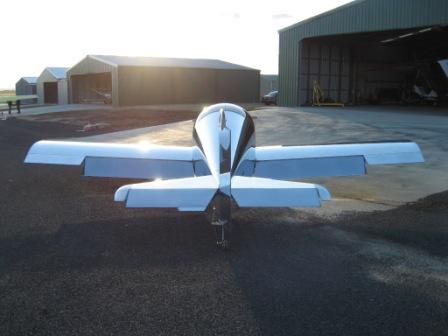 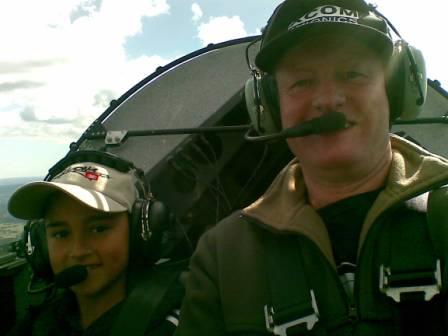 The first passenger, my son Charlie

6 yearly update. Its been 6 years since I updated anything here. The 10 year old kid in the photo above is now learning to drive. I thought I’d share a couple of the things I’ve tried over the years. Some failed, some worked. Back in 2012 I took it home to for a couple of months to carry out various jobs that were easier to do at home than at the airport. Most of this stuff was done back then.

Spinner. To reduce a bit of weight I replaced the heavy aluminium spinner with a homemade fibreglass spinner. The total combined spinner front / back and crush plate weighs 1/3rd of the billet. 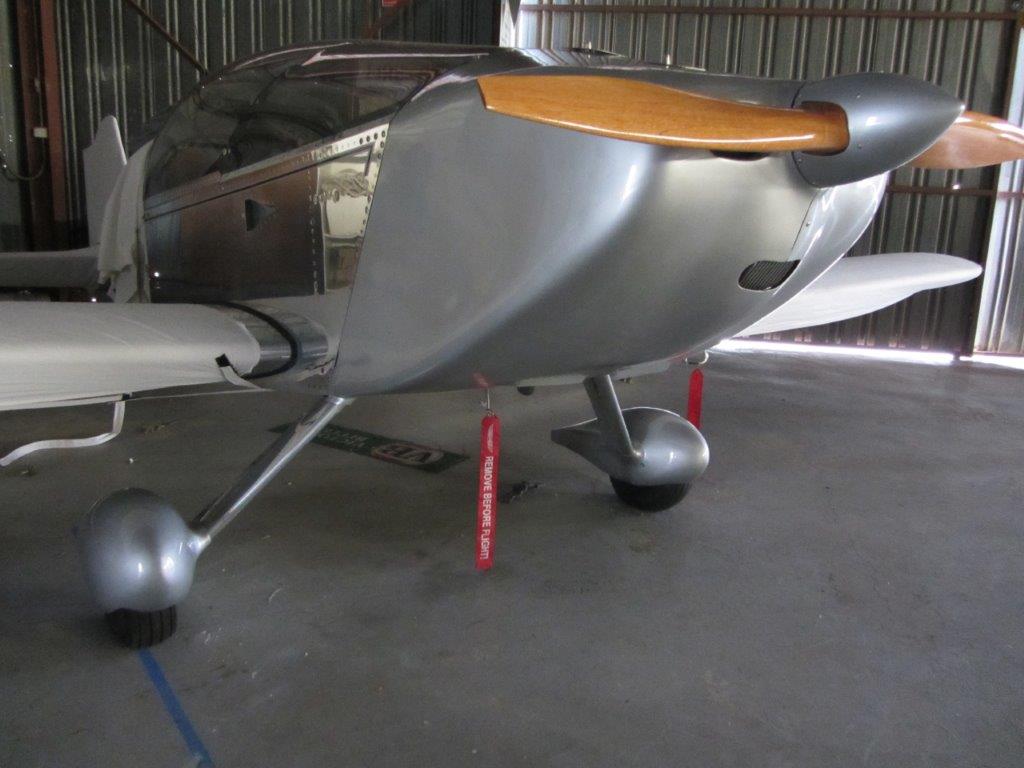 Ventilation. The standard ventilation was useless so made metal naca ducts from 025" 6061 T6. I took the T6 temper out of them with heat and the sharpie method. I repeated it a couple of times as it work hardens pretty quick when shaped. The ventilation went from being barely a draft with the original vents fully open, to gale force ventilation. It s a little bit drafty when closed as its not an airtight flap. Stopping the draft is another project to work on down the track. 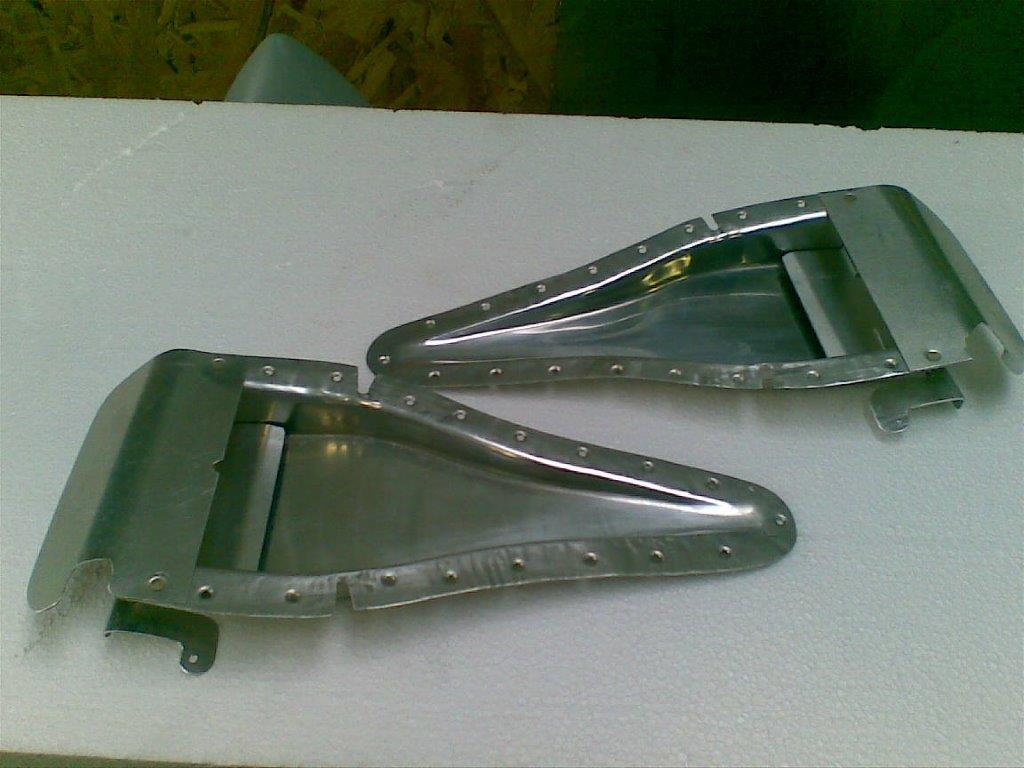 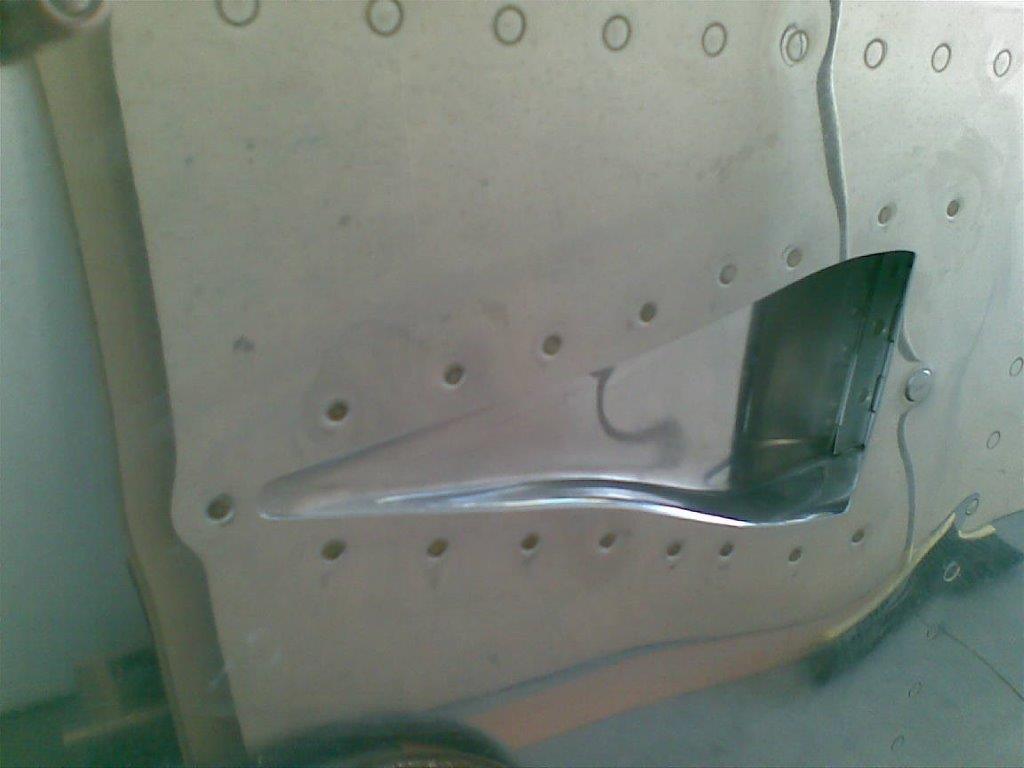 Paint. Re painted the cowl / wheel pants / tail tips and added a couple of stripes to the side.

Rudder trim. Added an adjustable rudder trim which pulled forward tension on the right rudder pedal. I did work but wasn’t a great success. The main problem was the spring tension required for cruise was huge, if it was missed on the pre landing check it would make for some interesting footwork on the pedals, It was like landing with a flat right tire. After experimenting with duct tape wedges of balsa and temporary aluminium tabs I settled on the tab. The wedge could be made effective, but it needed to be twice the size of the aluminium tab. I removed it last year and replaced it with the standard plans tab which works fine and is not at all noticeable at low air speeds.

Oil cooler flap. Added a controllable flap to the oil cooler, to speed up the winter engine warm up. It worked fine. I now live in a warmer climate and hadn’t used it for more than 3 years. I removed it purely to save the weight.

Fibreglass Cylinder head baffles. The aluminium ones kept cracking at the oil feed cutout. I reworked the old jabiru supplied ones. They were the external plug lead type which didn’t work real well. I enlarged them to the same volume as the aluminium ones. They work fine and I doubt they will crack. 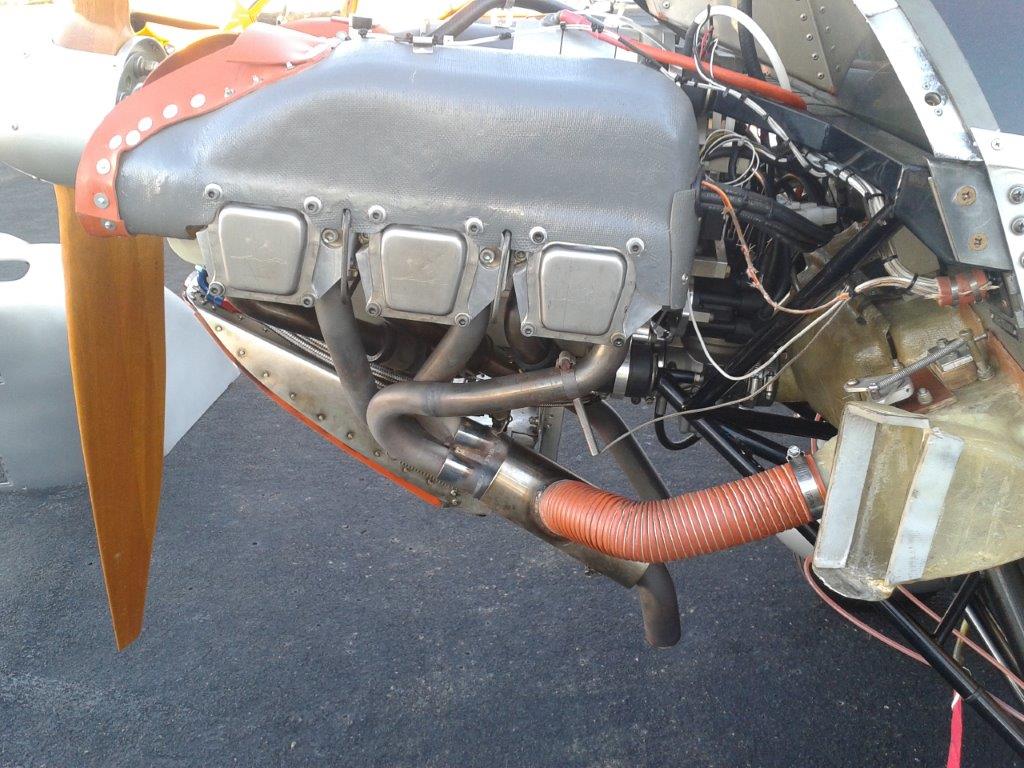 Wheel pants. I never liked the look of the standard wheel pants. Mine kept cracking. Not the fault of the wheelpant they were stressed from the way I spread them over the hydraulic brakes and larger tires. Back in 2012 I started experimenting with a pressure recovery shape. Adrian gave me a nice looking wheel pant to measure up so I made a couple of plugs based on that. One at 1:1 and 1:1.2 to suit the larger tires. Finally last year 2015 I finished installed the larger set on the plane. Its hard to tell if there is a performance or not. Its definitely no slower.

Dust covers. Undoubtedly the most important accessory for a polished plane. Dust / fingerprint covers. Especially important in a shared hanger 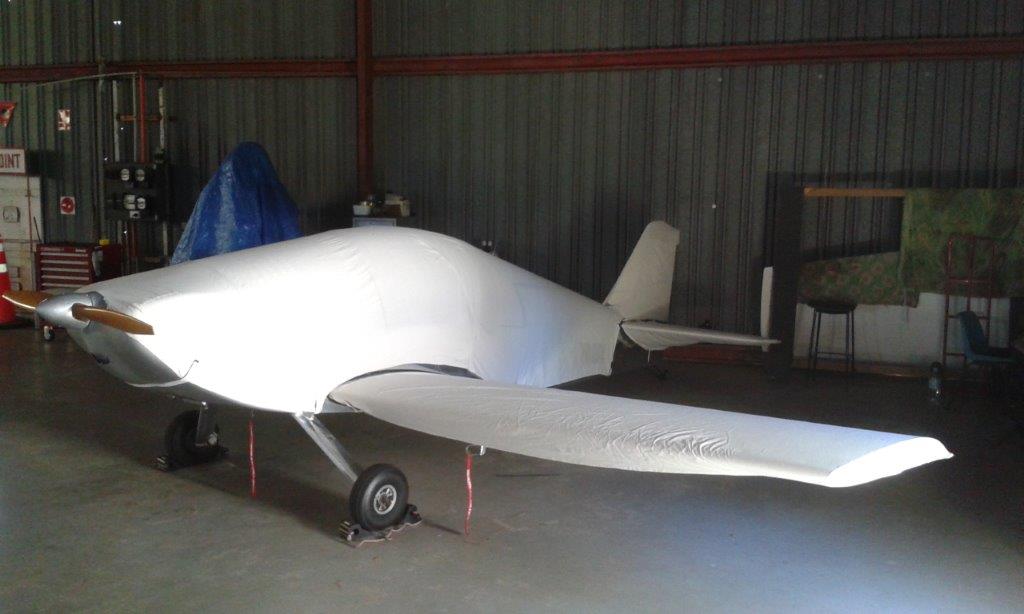