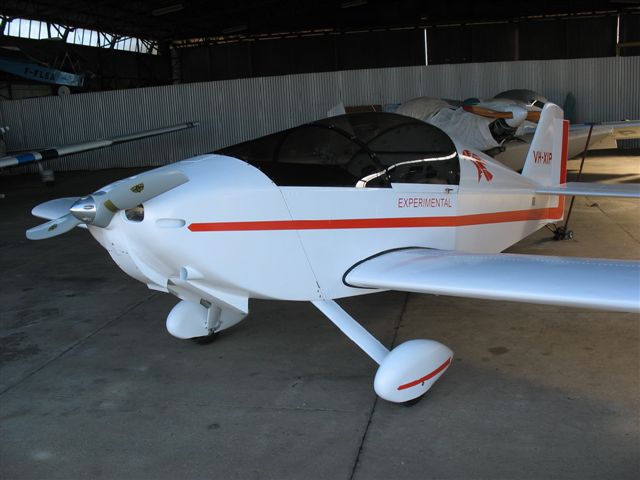 My Sonex is a standard tail dragger with the dual controls option.

I used solid rivets for the fuselage & all internal riveting. I found on the 6061 that universal rivets were best although flush rivets were OK if you could back rivet them.

The leading edges of the wing have to be treated very carefully. Even picking up the skins the wrong way can cause a crinkle. With the flush rivets it is advisable to drill the holes in the ribs one size less than 1/8 & make up a dimple die with a smaller spigot. If this is not done the rivets may pull through the holes.

I originally fitted the canopy according to the plans. It promptly started to crack. I found a much better system on the American Sonex Association website. This simply involves creating a channel at each side & retaining the canopy with Silicone. The only holes in the canopy are the ones around the bows.

The tail wheel was inadequate for operation at my local airstrip. I built a new bracket & fitted a Fallshaw wheel. This is a plastic wheel with roller bearings & a good thick tyre.

A Dynon D60 EFIS takes care of my flight instrument requirements. This took a bit of getting used to but is working well.

I have two small Magellan GPS units which are capable of supplying “ Get you home “ type information if the EFIS failed.

I purchased the engine instruments from Jabiru. These are VDO but have the green arcs in the right place.

The standard Sonex spring loaded trim control is mounted for right hand operation. In flight this is no problem.

Firewall forward provided a few challenges but solutions have been found. After much reading of the internet it became obvious that controlling the temperature of the Jabiru is critical.

I used the Sonex supplied baffling kit & went to considerable effort to see that none of the air that enters the cowling is wasted. Others have reported that No 3 Cylinder runs hot.

I fitted an extra scoop into the top of the R H cowling to feed air to No 3. It works.

Getting the air out of the bottom of the cowling is important. The Sonex cowling as supplied for the Jabiru has to have the bottom cut out to make room for the sump. Instead of putting a fibreglass dome over it as Sonex suggest, I incorporated the needed bump into an air outlet.

As an old motor mechanic, I was impressed with the way that the Rotec TBI operates, so decided to fit one. I had a few early problems but Paul at Rotec was extremely helpful & the problems were sorted out. Having now done 90 hours I am very pleased with its operation.

I have total control of the mixture & am quite impressed with the power & economy of the Jabiru.

Am I pleased with my Sonex ? You BET.

A friend designed and built this many years ago to rivet the spars on his RV, which uses 3/16″ rivets.

It has since riveted the spars for another RV and three Sonex. A four ton jack supplies enough pressure to squeeze the rivets perfectly. The construction is very simple and should be well within the capabilities of an aircraft builder. The original is available for any Sonex builder who wants to use it.

I may need to use it again, so, I would like to keep a check on where it is. With two people operating it, spar building becomes a simple and quick operation.

Some thoughts on the Jabiru 2200 engine in a Sonex aircraft.

Prior to fitting a Jabiru 2200 to my Sonex, I did quite a bit of Internet research to try to find any problem areas. I came to the conclusion that many of the troubles were probably caused by detonation. Overheating is usually the cause of this, so careful attention to cooling is essential.

There is some good reference material in the books written by Tony Bingelis.
FIREWALL FORWARD & TONY BINGELIS ON ENGINES.

I bought the enclosed pressure chamber type baffles supplied by Sonex. These seem to be OK as far as they go. A point that Tony makes regularly is Cooling Drag. Any air that enters the inlet ducts at the front is cooling drag. It is most essential that all of this air is forced through the fins so that it can do its job of cooling the engine. Any places that the air can escape without doing its job is excess cooling drag. There were two places on top of the engine that I thought required additional attention. The worst was around the starter motor and engine mount on the left hand side. I went to considerable trouble to seal this area. The other place is between the cylinder heads. I was able to bend up ‘V’ shaped pieces of sheet aluminium that forced the air through the fins.

Other builders have reported problems with overheating on No.3 cylinder. As No.1 cylinder is hard up against the cowling on the right side, I decided that this was restricting air flow to No.3. My solution was to fit an additional air duct above the existing one.

The underside of the engine received little mention from either Jabiru or Sonex. They suggest inter-cylinder baffles on the six cylinder, but not the four. I have looked at many aircraft engines and they all had baffling that wrapped around the cylinders with a gap of around 2 ½ inches for the cooling air to exit. On mine, I fitted inter-cylinder baffles. I also fitted baffles to wrap part way around the cylinders front and rear, as is standard aircraft practice.

Bingelis simply states that the outlets below the cowl should be considerably larger than the cowl inlets. Jabiru say that they should be three times the size. Bingelis also says that the exiting air should be travelling as near to parallel to the slipstream as possible.

It is necessary to cut a hole in the bottom of the cowl to accommodate the engine sump. I incorporated an air outlet into the sump cover. The original Jabiru muffler has been heavily modified to get the pipes in the right place and pointing in the right direction. I was able to build air outlets around them.
I am able to do full throttle climbs on a hot day and all temperatures stay in the green.