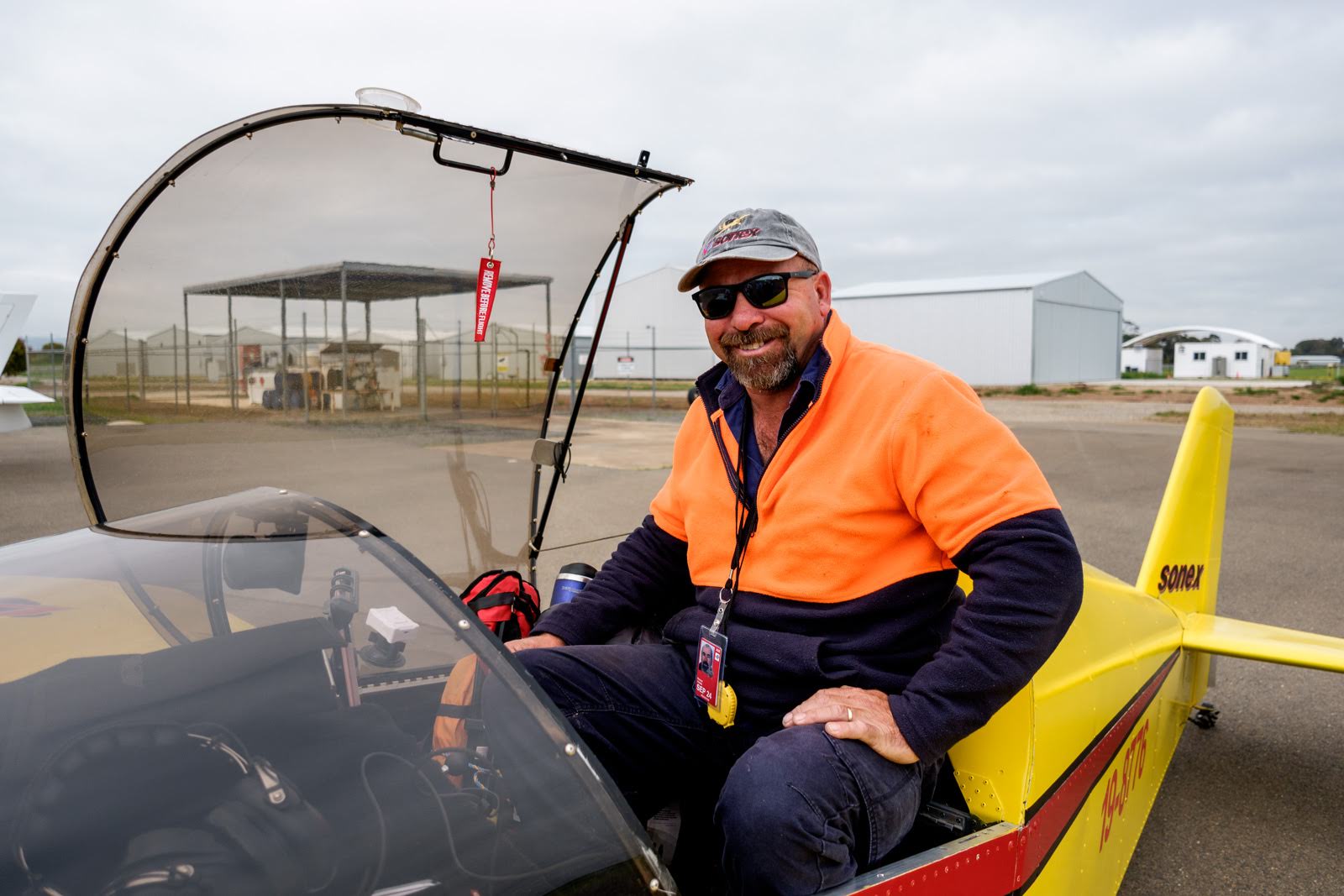 This event has been on my ‘bucket list’ for a little while now. So as the sole representative of the Sonex Aircraft community I attended and waved the flag. I am a member of the Adelaide Soaring Club from which 7 aircraft flew to William Creek for the event this year. I apologise if I have miscounted. The weather was decidedly ‘iffy’ on Friday morning with low cloud and fog. A number of us went up for a ‘look’, but we all landed quite soon after and returned to our favourite pastime (talking about planes, of course) while waiting for the cloud base to lift.

Now for the uninitiated, a Sonex is not a large touring aircraft, I know that others have managed to fit two people, plus luggage, camping equipment, food and spares into one aircraft but I am definitely NOT one of those people! I almost had to leave myself at home.

On the passenger side, I had my food container, water container, chair, sleeping bag, tent and air mattress tied down with my obligatory coffee cup perched in the middle where I wouldn’t lose it. Behind me on the parcel shelf, I had a jack, spare tube, tools, tent pegs, electric drill ( for screwing the pegs in and jacking the aircraft up in case of flat tyre ), torch, air mattress pump, jacket ( why I thought that I’d need it is up for discussion, it was 30 odd degrees C ) and booster battery for charging up various devices, powering my air mattress pump and jump starting the engine in an emergency. I could have used the aircraft battery but I was too scared to use it for other stuff other than starting the engine and didn’t want to get myself stranded. I didn’t have to worry about my weight and balance as it was only myself and the stuff, it’s just bulky. If there was two of us travelling, I don’t think that it would be possible to camp out.

All of us managed to get away by 10am from Gawler, Bradley and Kayla were my travelling buddies in their Jabiru SK. Scott in his Zenith CH601 travelled with Chad and Marcine in one of the club’s Jabiru 170’s travelled together. The others, Jeff and Anthony Jabiru 160, Stuart Jabiru 230 and Henri in his Foxbat Vixen all headed off towards Leigh Creek. Bradley and myself elected to take the roundabout route to William Creek via fuel stops at Pt Augusta and Leigh Creek. We both only have 60 litre tanks, depending on which way the wind is blowing it’s a little ‘iffy’ doing Leigh Creek in one go. You CAN do it, but Captain Cautious here played it safe.

The low cloud finally parted once we passed by Brinkworth where we emerged into blue skies, green valley beneath us, rolling hills to the right and Spencer Gulf off to the left in the distance. The air was crystal clear and beautifully smooth, to say that it was magnificent would be an understatement. Scott and Chad stopped off at Port Pirie to stretch their legs and put a few litres of fuel into Scott’s Zenith.

Bradley, Kayla and myself continued on to Port Augusta for our fuel stop and lunch. I’d like to report that we were greeted by a marching band and lunch provided on silver platters, however the reality was packed sandwiches and junk food from the vending machine. Once we set off from Port Augusta the view became particularly striking with parched brown off to the left ( West ) and green about the Flinders Ranges off to the East. It became a little bumpy in the early afternoon heat, but I kept on climbing at cruise power at a steady 100 kts. By the time I’d levelled off at 5500 feet, the bumps ceased and it was very serene cruising along at a steady 120 kts. In my aircraft I can’t climb continuously at full power on warm days beyond about 2500 feet in one go as the oil temp climbs up and nudges the yellow zone at 218 degrees F. If I push the nose over once out of the circuit and gently climb at 100 kts into the cooler air it becomes much more civilised. It could probably do with some sort of adjustable cowl flap to facilitate extra cooling in the climb and then close off once at cruising altitude. It’s the thought of unhooking that sort of complexity and reconnecting when removing the cowls puts me off. I really do believe in the KISS principle ( Keep It Simple, Stupid ).

A little over an hour later, Leigh Creek came into view along with a small crowd of other aircraft all travelling onto William Creek. There was quite a few ‘blue circles’ on OzRunways all travelling in the same general direction.

Stuart chose Leigh Creek as his location to strike trouble….he burst a tyre whilst landing. A bit more tread on his tyre might have avoided this. Luckily for him, Chad and Marcine were carrying a spare wheel in their Jabiru which saved Stuart from a wrecked weekend and definitely a carton on it’s way to Chad! The air temperature was getting warmer by this stage, which made the bumps bigger. My Sonex with the Jabiru 6 cylinder is a rocket ship in this situation, getting off the ground and getting out of the circuit is a piece of cake. For the others with the lower horse power made it more of trial. Scott in particular complained about the time taken to get to 4500 feet in his Zenith which has an 80 HP Rotax fitted to it. It doesn’t help that his aircraft is as streamlined as a barn door! By the time I’d climbed to 8500 feet I was actually feeling cold. I didn’t want to go much higher as I was flying IFR ( I Follow Roads ) on the route to William Creek and didn’t want to lose sight of the Oodnadatta Track.

Now after a late start, far too much talking and time wasting, the reason for spending the day flying came into view. William Creek is easy to miss it you are not paying attention, there is not much there, it’s full of character but you can’t see that from the air. I used the two salt pans as my aiming point, the big one on the left, the smaller one on the right and flew down the middle with Lake Eyre off to the right hand side. Well the map didn’t lie, William Creek was right where it was meant to be, dead on the nose! To say that I was pleased as punch with myself would be an understatement.

There were a total of 34 aircraft and 1 helicopter that attended the weekend event. Late Saturday night, I sat on my camp stool leaning against my Sonex that I had scratch built, navigated to the middle of nowhere, spent a weekend away with a group of other like minded individuals, many of whom are friends that I bump into from time to time all over the state. I had a cup of coffee in hand, snacking on some porridge and just stared up at the stars, the glow from the lights and was in complete peace and satisfaction. We flew home the next morning in the reverse order of Friday, when I arrived home in the driveway, my wife greeted me with the comment that ‘I was glowing’, she also said that I smelt like ‘airplane’. What more can I say, than I had a “bloody good weekend”.

Most of the photos on this page were taken by Chad Mauger, thanks mate.