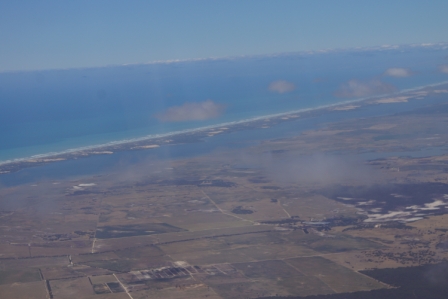 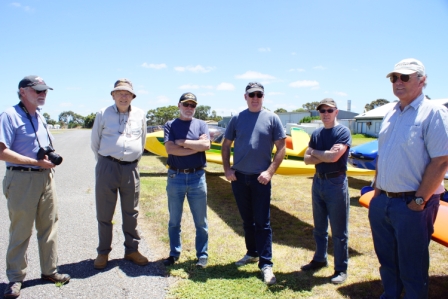 What’ll we do now? Answer, off to the Bakery in town, and a catch up on what we have been up to in the last few months. 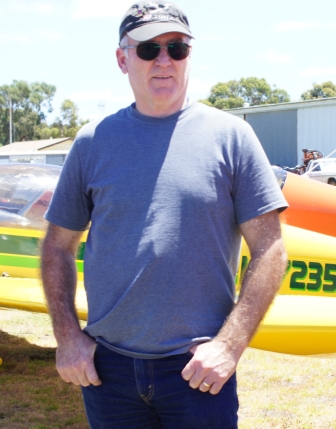 Richo was on one leg. What dedication to the cause!! 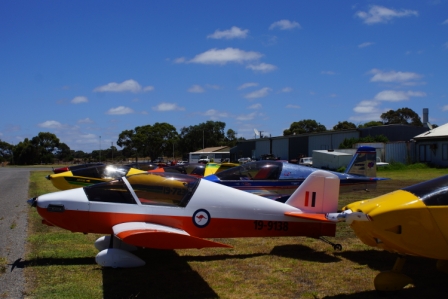 Merv is currently in Australia visiting his son Chris, who is based in Adelaide flying the Metro Liner for Sharp Airlines. Lynn Jarvis organised for Merv and Chris to go flying in the Sonex with him and in the Xenos with Chris Dearden and Steve Nelson. It seems that it was a bit of a change in weather for Merv. 15C to 30C here and -27C to -20C at home!

Below are some shots taken on the day. Air to air shots taken by Lyndon Trethewey from Steve Nelson’s RV7. 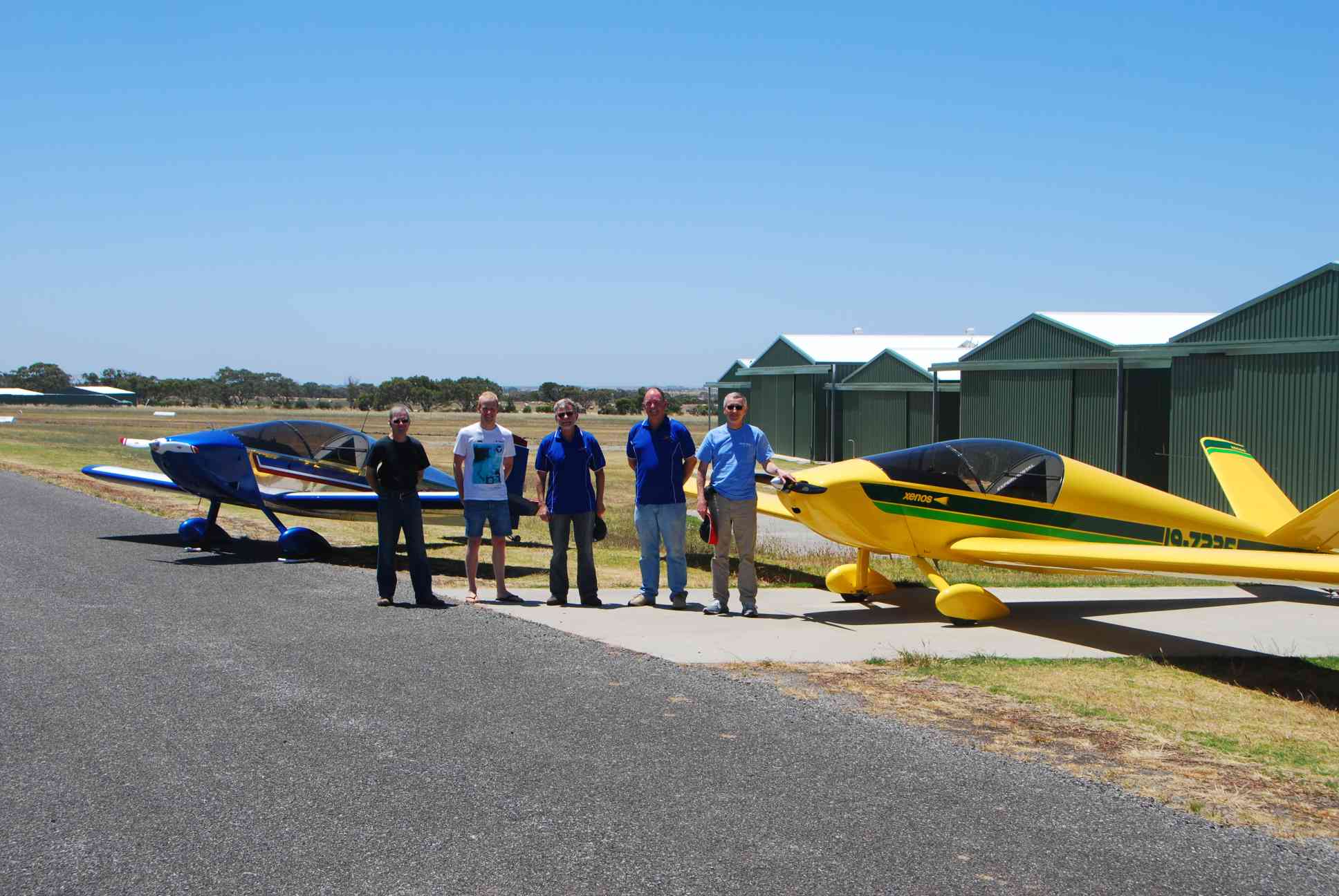 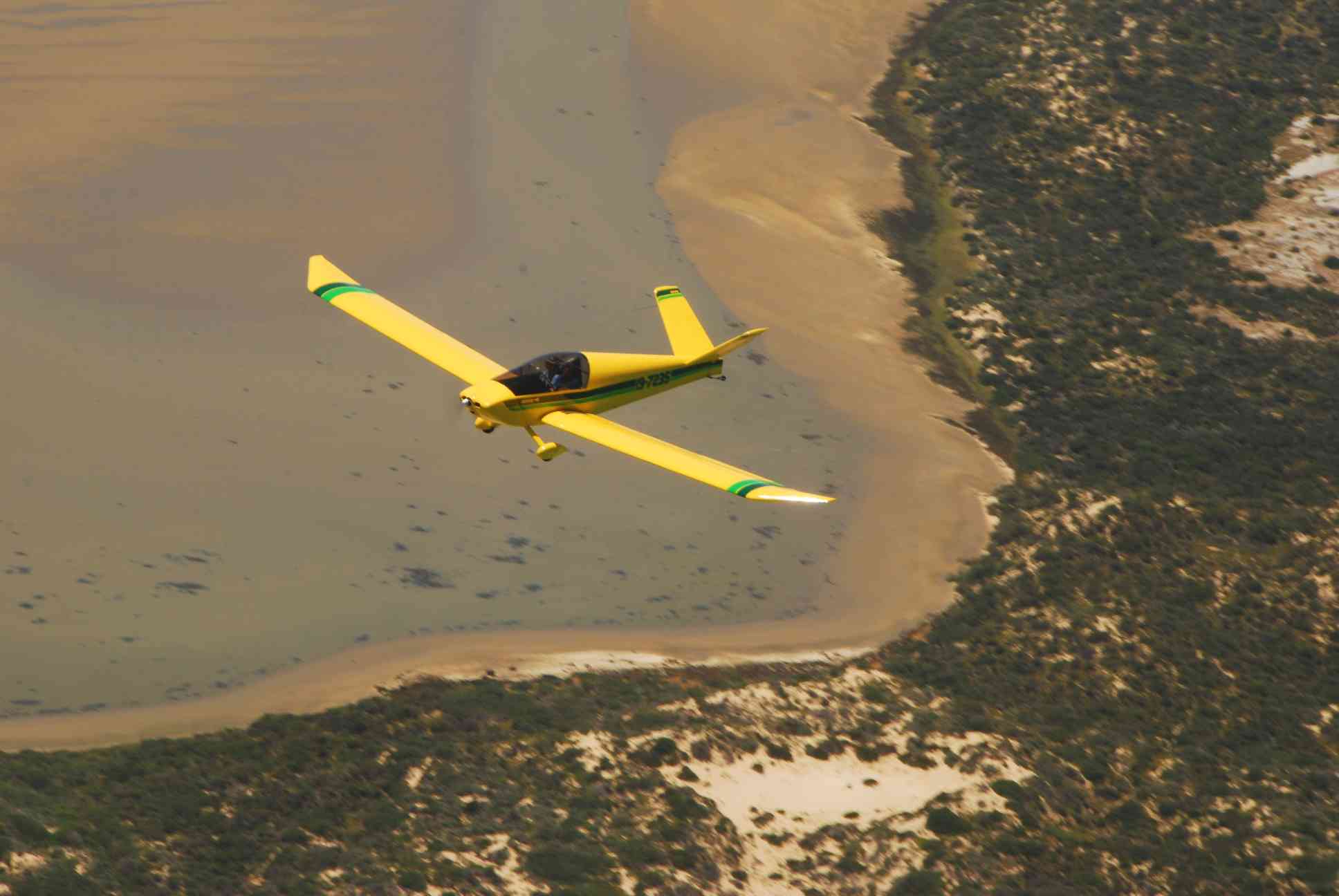 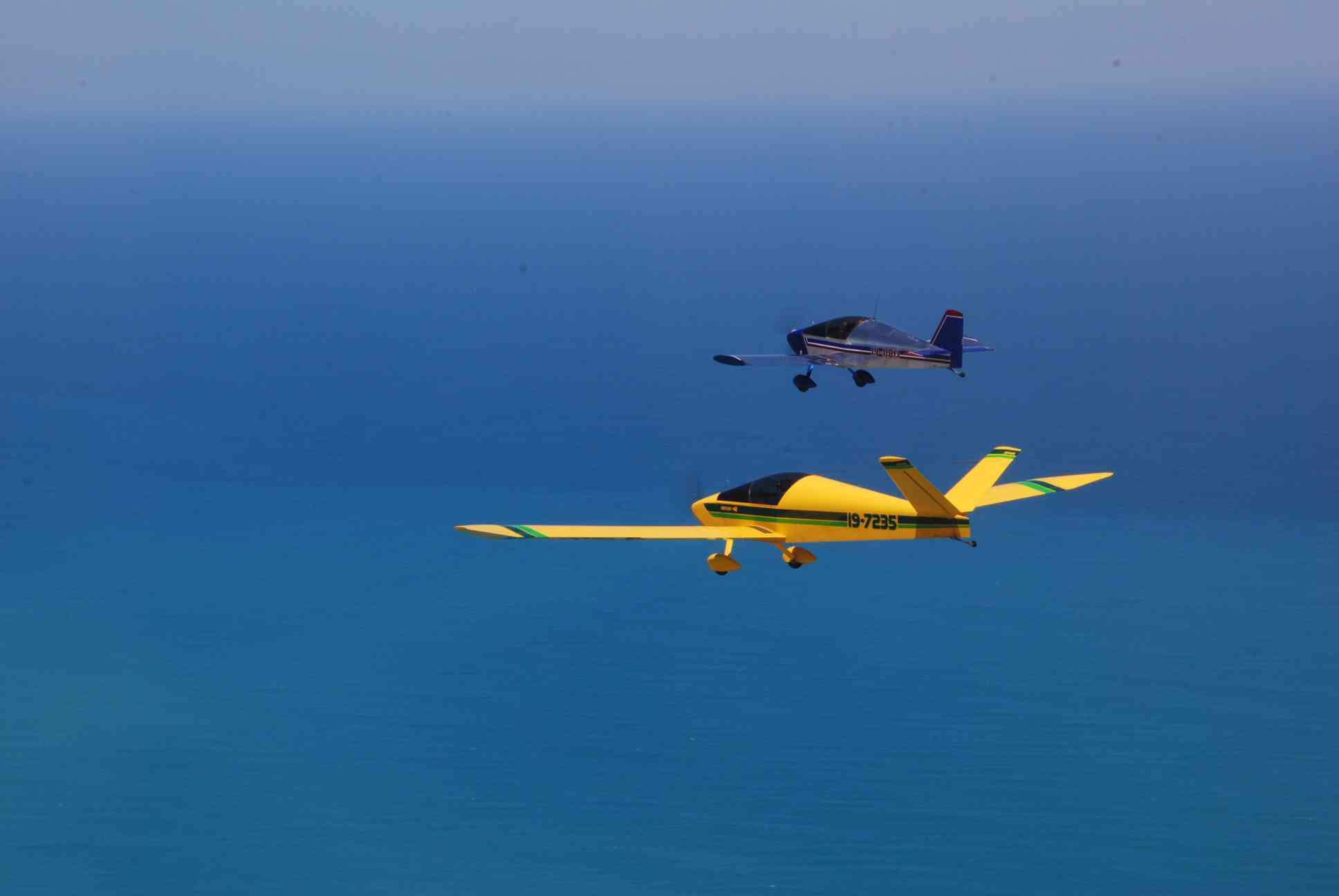 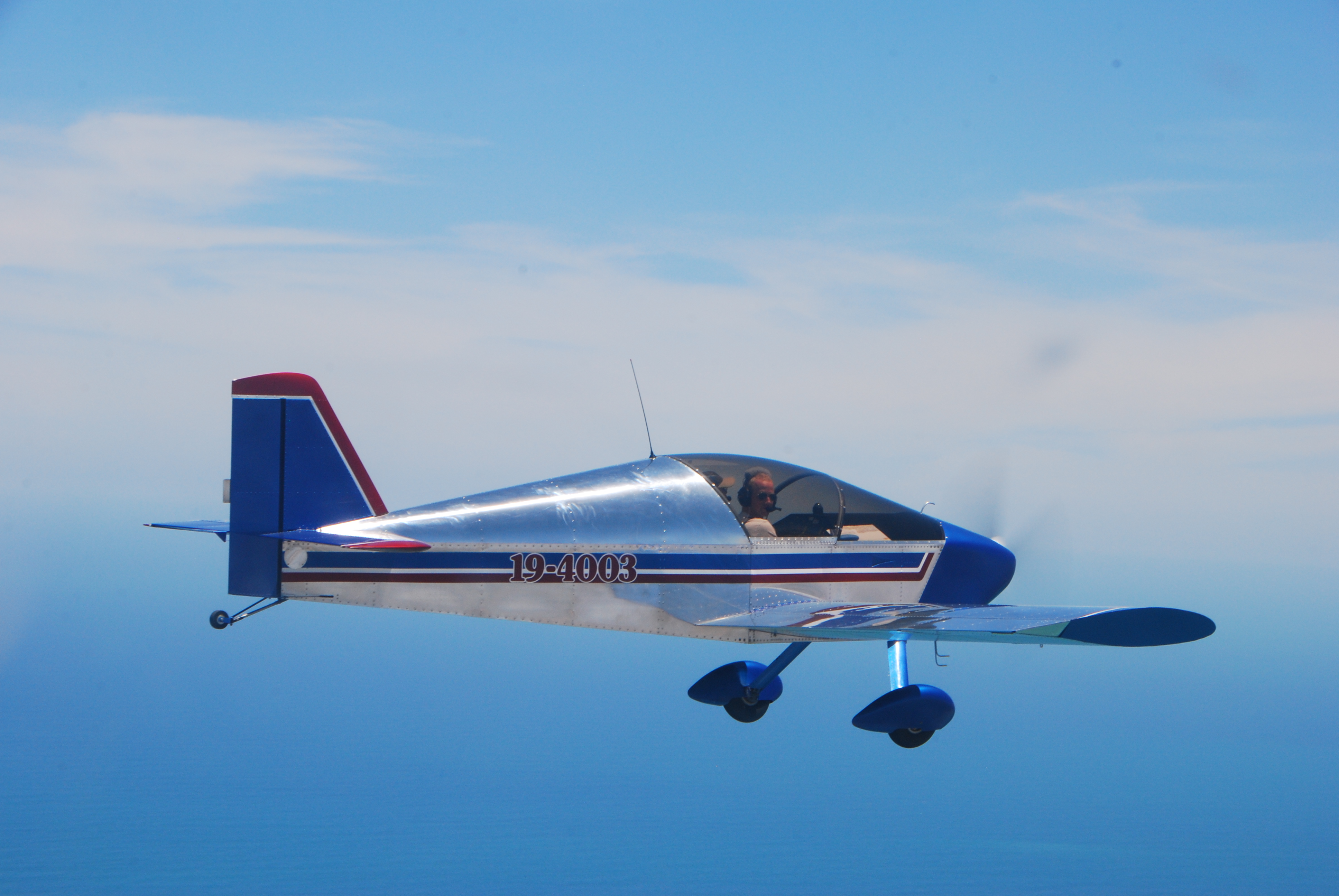 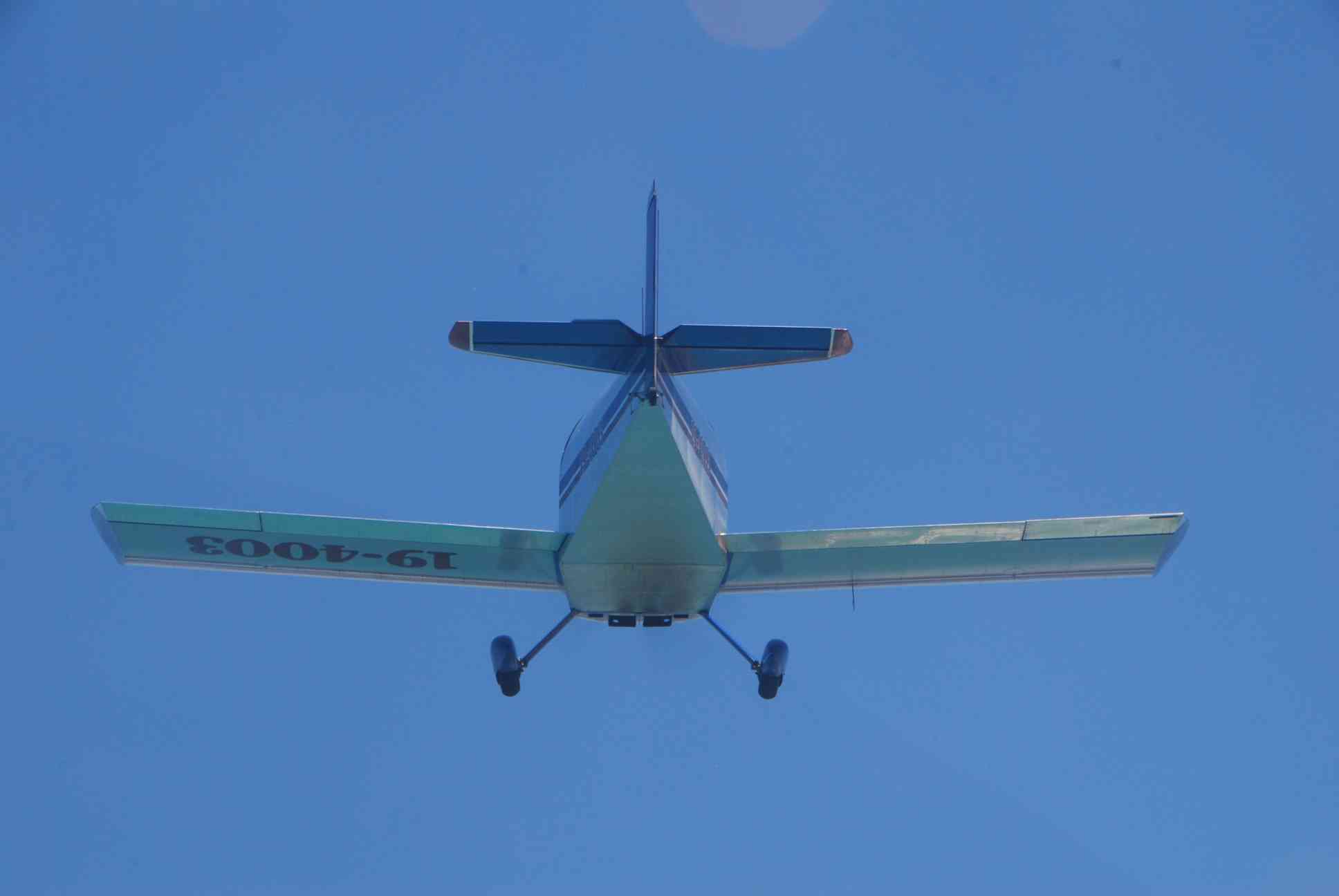 In January 2012 Stuart, Brian and Shane flew down to Latrobe Regional Airport for a visit.
I picked them up and took them for a look at the progress I am making on my Waiex.
We then returned to Latrobe where Chris Bishoff showed us the work he has been doing with fuel injecting his Sonex.
Chris is hoping to have his plane ready for Yarrawonga so that all can have a look. 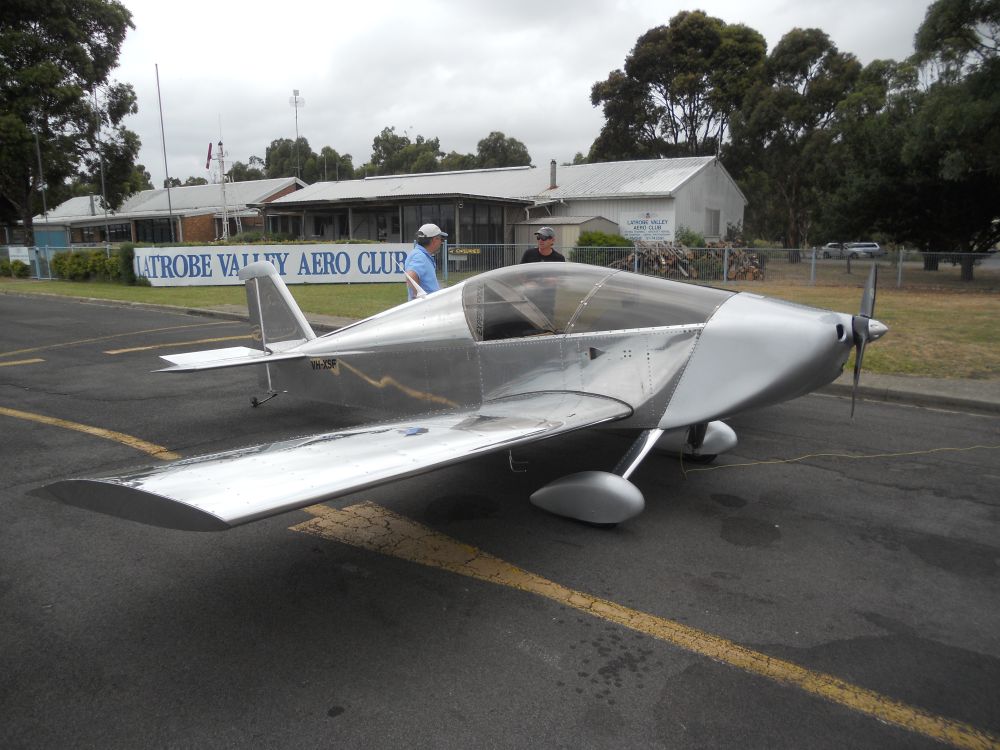 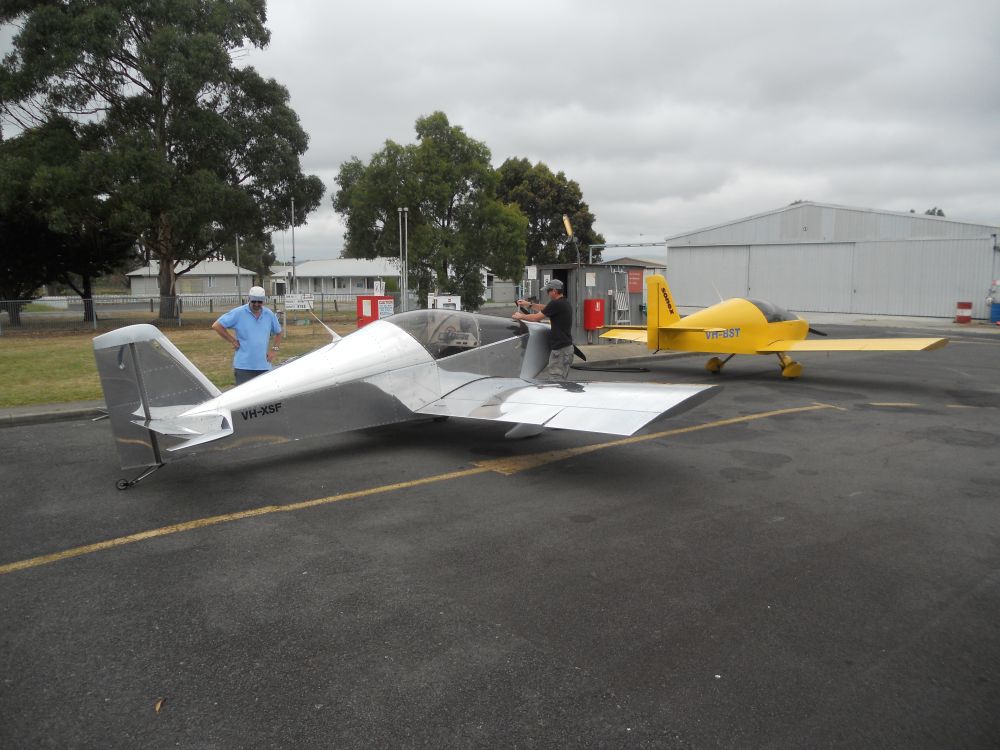 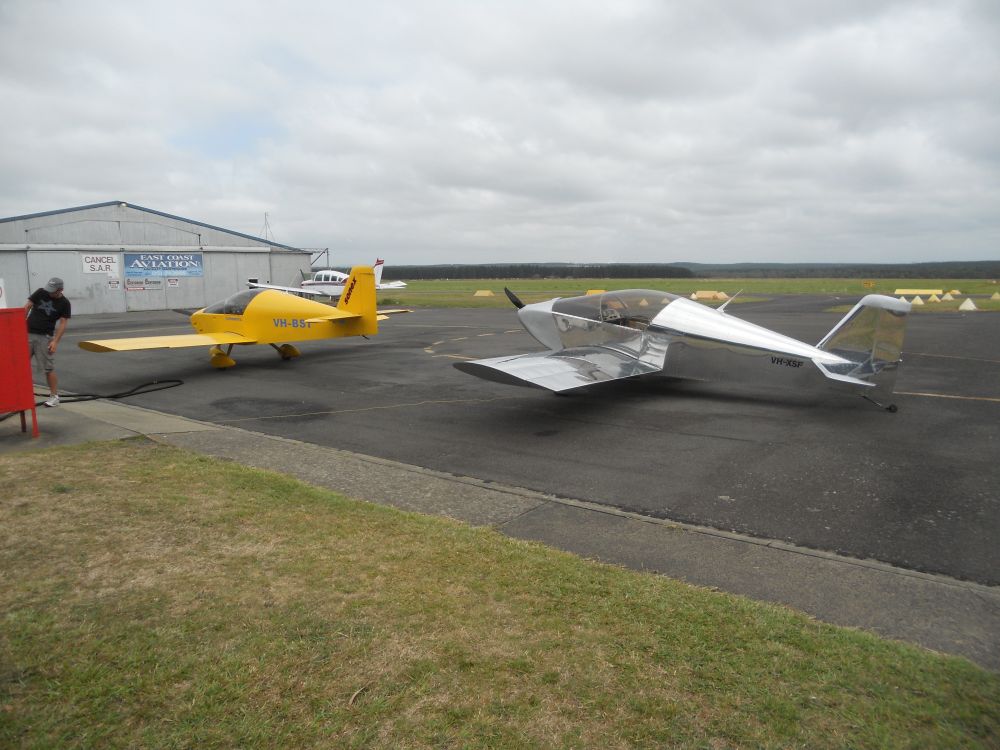 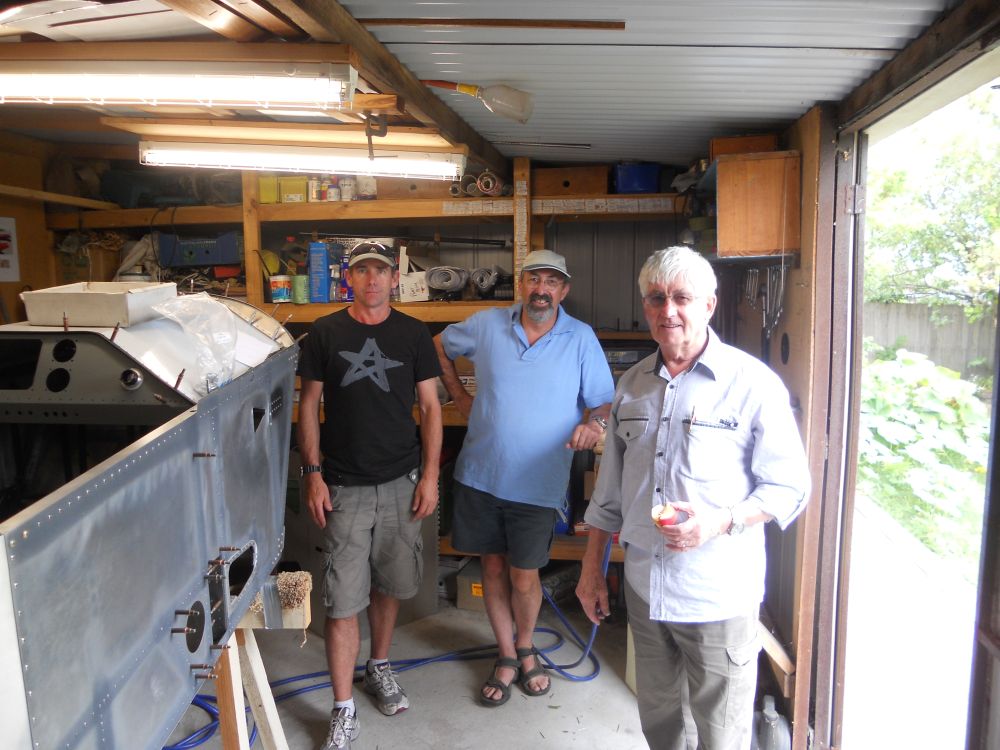 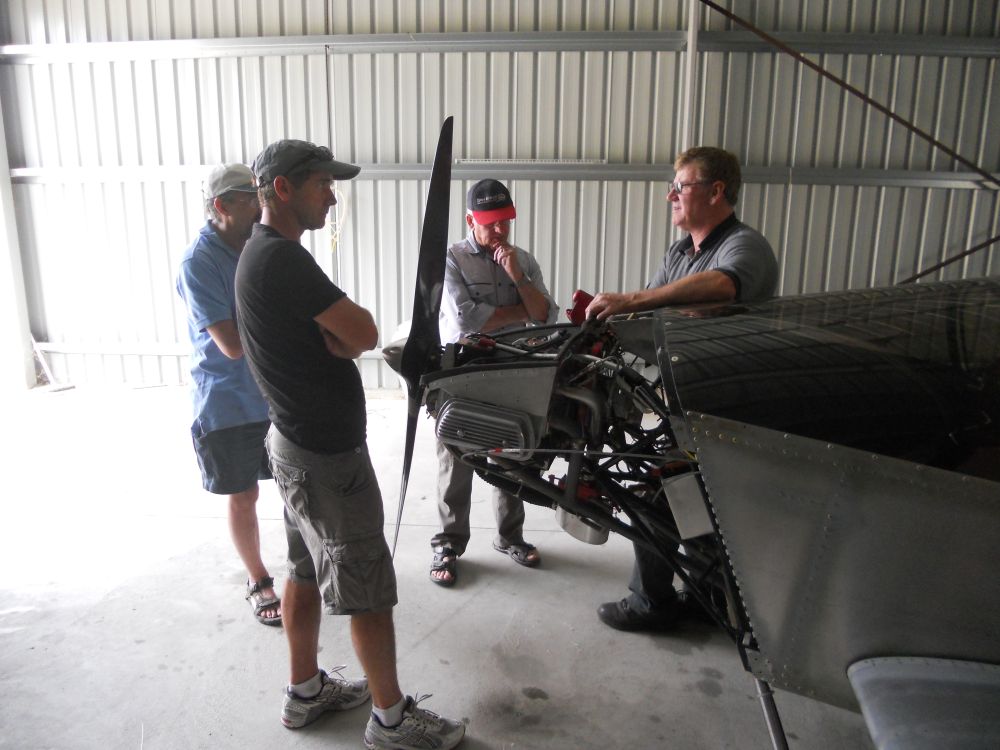 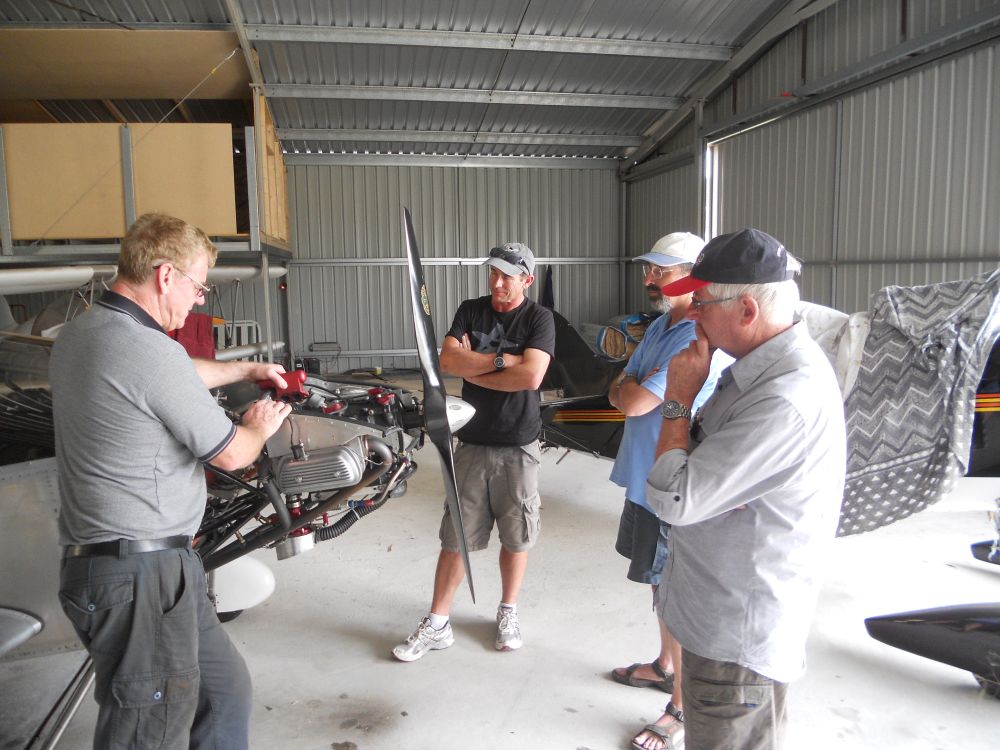 Sport Aircraft Association Australia – Ch 5 Workshop visit – Sunday May 1st. 2011
Chapter 5 of the SAAA workshop visit this month is with the under construction Waiex #109 in Newcastle NSW.
We will be kicking off at 13:00 with a sausage sizzle.
If anyone is interested in coming along feel free to do so, all welcome.
Txt me on 0458 257135 or email peter@eedy.id.au for the address. Peter Eedy

Update had a great day at the workshop visit, had a couple of prospective Sonex Builders turn up as well, good to see. Anybody interested in a look see feel free to contact me to arrange a visit.

April 13:"IT SEEMED LIKE A GOOD IDEA AT THE TIME" Department
1. Brian Ham is back to the drawing board. A number of builders have admired Hammy’s fancy castering tailwheel but he has asked me to post this disclaimer. It looked like a work of art, but when he mounted the aircraft on the undercarriage the angle of the castoring fitting was wrong…..dohh. Brian might update progress on this shortly.
2. Two builders have copied Stuart Trist’s homebuilders oil separator. It works well on ST’s Jab2200 but caused oil leaks on Shane Fewing’s Aerovee, due to the oil vent lines being too small a diameter. Anyone else who copied this idea can contact Stuart’s lawyers.

April 11: Sonex on Floats
Craig Brown has taken delivery of his floats for his Sonex project at Beauty Point, Tasmania. Find out more from his page. Click on the nav pane at left.

BBQ at Brian Ham’s 2011
Brian and Cath Ham welcomed a few local builders to their home for a BBQ and builder’s visit. The group included Victorians Thomas from Meredith, Simon from Beaumaris and his mate Greg, and Stuart from Mordialloc. We were able to welcome Craig Brown from Beauty Point Tasmania, who was in town to work in the tower at Avalon. Craig is building a taildragger and already has a set of floats for it
. Brian has promised to add to his page with some details of his immaculate 3300 tail dragger. 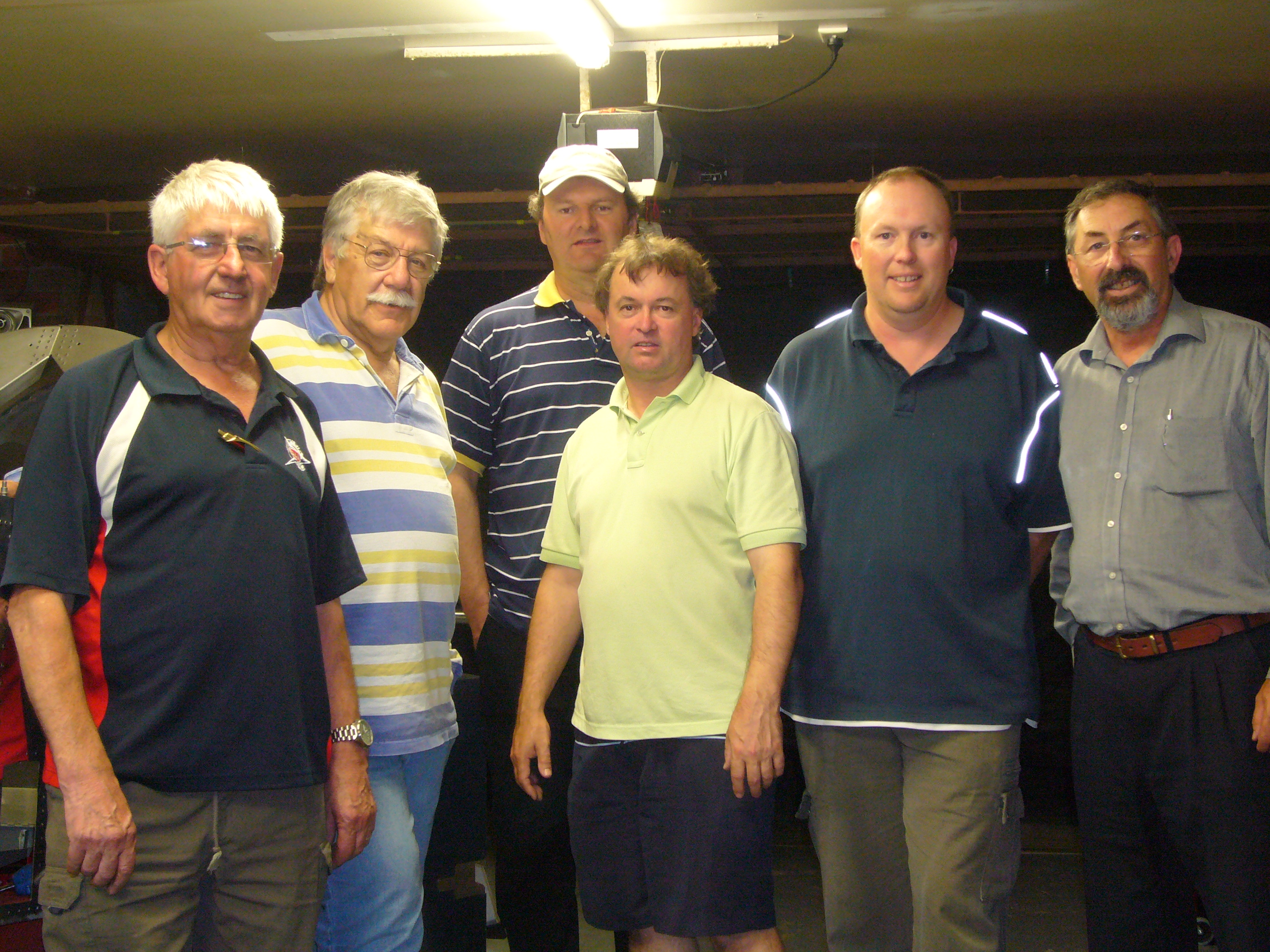 28 Dec 2010: Another Sonex in the air:
Between Christmas and New Year I flew down to Colac, Victoria with Brian Ham and Shane Fewings to see Gary Wright’s project. I had a feeling he was a fair way down the track but was surprised to find him ready for his first flight. Brian flew with me in BST and Shane flew XSF. Unfortunately, Aub Coote, designated Test Pilot for the day had done the deed by the time we arrived. With a faulty ASI it was decided to not fly again, but we enjoyed looking over Gary’s fine yellow Aerovee powered tail dragger and we enjoyed some sandwiches for lunch courtesy of Gary’s wife. Well done Gary, almost all scratch built and a beautiful machine it is. (Gary, how about a pic or two??)
Stuart Trist