SonexAus – Spar Bolts What follows is a technique for drilling the holes for the wing spar retaining bolts.
This has been adapted from an idea by William Sergent that was then modified by William Wright.

William Sergent wrote:
Months ago I printed the method we used to accurately drill the 3/8 holes through the end of each spar on Paddy’s #96 wings.
I have just done mine #160 and thought I would repeat the sequence as it is so simple.
Many builders have had trouble increasing the holes in the spar mounting blocks from 3/16 to 3/8.
Drilling these holes through the large blocks on the spars while they are in the fuse is difficult, and tends to end up with the holes running off centre ruining the blocks or the angles on the fuse sides.
This method involves about 10 minutes work on a lathe, but unless you live in the middle of the Canadian Rockies I am sure you know someone with one. If you have to pay someone it will still be cheaper than the step drills and anguish of having to replace the blocks and or angles.
This sequence starts EARLY in the wing construction.
1 build both spars through to completing the riveting stage, but before adding any ribs and the root rib bracket.
2 Align both spars and bolt together using the 3 1/4 bolts through the spar webs.
3 Ream the 3/16 holes in the blocks with both spars together (these holes were drilled earlier in the drill press before assembly.)
4 Check that both spars fit together properly i.e. there is clearance between the rivets and also the indexed bolts on each spar end.
5 Set the spars up in your drill press and clamp securely. 20 ft of spar can be a handful but an extra pair of hands will solve this. Make sure that the spars are square and level to the drill bit.
6 Drill straight through the blocks and webs in one go. Don’t step drill go straight from 3/16 to 3/8; as long as it is clamped it will not wonder from the existing hole.
7 Repeat on the other block.
8 Complete wing and start on fuse. The Fuse has to be planned ahead as well. DON’T rivet in the 2 angles that the 3/8 pins that go thru in the spars to secure the wings to the fuse. Leave these clecoed only.
9 Turn up a piece of steel rod to 3/8 outer diameter and centre bore a 1/8 hole through this rod It needs to be about 4" long. 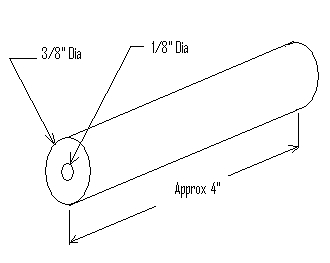 10 check that the rod is a neat fit in the holes in the spars.
11 Fit wings to the fuse and set incidence etc and rear spar.
12 Remove the rear angle on the fuse side exposing the spars.
13 Put 3/8 rod through the spar and with a long 1/8 drill, drill from the rear through the hole in the rod and out through the front angle.
14 Replace rear angle and remove the front one. Drill through the rear angle from the front.
15 Repeat on the other side of the fuse.
16 Remove all angles and drill the 1/8 holes up to 3/8
17 Have a cold beer.
It sounds a lot worse than it is, we have done it twice now and it seems to work (at least Paddies wings haven’t fallen off yet.) As always this is only an idea and use at your discretion.

William Wright wrote:
Step 9 of Bill’s instructions calls for “Turning up a steel rod to 3/8 outer diameter and centre bore a 1/8 hole through this rod It needs to be about 4-inches long.”
This requires machining a part but there is another way. You can use 4130 steel tubing. I purchased a one foot long piece of 3/8 –inch outside diameter by 0.185-inch inside diameter tubing for Aircraft Spruce.
I also purchased a 6-inch long #13 drill and a 12-inch long #13 drill bit to use in place of the 1/8-inch drill described in Bill Sargent’s e-mail post. You will have to work the steel tubing to get everything to slip together nicely. Start by drilling out steel tubing with the number #13 bit so the bit will slip through easily. If you are not happy with the slip get a 12-inch long 3/16 inch drill (which is 0.1878) from Home Depot and ream a little more. Chuck the 3/16 inch pipe in your drill bit and polish it with a scotch bright pad to turn it down slightly so it will slip smoothly into a 3/8 inch hole.

My variation to the above procedure revolves around step 8 which says “DON’T rivet in the 2 angles that the 3/8 pins that go thru in the spars to secure the wings to the fuse. Leave these clecoed only.” I think the forward angle can be riveted and then upsized to 3/8” in place the “Steel Rod” is then used to mark the aft angle by fitting it through the forward angle and both spars and pilot drilling from the front.