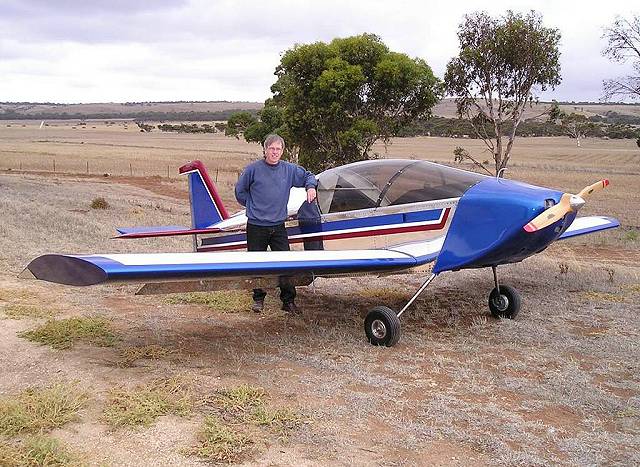 February 18th 2004. Four years after I started and 2850 hours logged building time. Pretty well what I had predicted, about 3000 hours over 4–5 years, and maybe a bit less than I thought. The laser cut and pre-drilled kit now would take years off the build time. If only it was available when I started. But I have no regrets – what an incredible experience. I could make anything now. I have AN this and MS that wired into the brain…

Anyway it has to happen some time. I have to test fly this thing.

For some time I had been planning how to do this, what weather and wind direction would be best, maybe practice in the Cygnet beforehand using my right hand on the stick, brush up on my experience with flaps in a Jabiru perhaps. I was all but pacing the runway to check how long it was.

Finally the day came when I had the Sonex all rigged and ready, and I thought – what’s wrong with today. A bit hot maybe but not too bad. So I decided to practice some runs up and down the strip. You know the rest I am sure, I was ready for it. I was also ready to shut down and get it on the ground again, but I didn’t need to. Anyway, here is my experience as well as I can relate – as posted on the Sonexplans email group.

Yesterday on a hot and bumpy Aussie mid-summer day, I flew my Sonex for the first time.

The engine-runs the day before went great and I spent a lot of time getting the mixture right with the Aerocarb. I want it running slightly rich for the first few hours. I had the canopy off for engine runs because it is unbearable with it on and not moving. It hit 46° C a few days ago out there. Yesterday I gave it full throttle with no problems. Wow that 2200 roars. No problems except one high CHT. The RH rear cylinder is the hot one. Checked the mixture again. Any richer runs rough. There is a slight rev up with fuel off, but smooth running. Slightly rich I am sure.

I was ready for some taxi tests, so I trundled out onto the strip. Visibility is fine to the side but straight ahead needs some weaving. Tracking down the strip is no problem. The brakes work perfectly, smooth and effective. The RH eyeball airvent gives a blast even while taxiing, so that’s a bonus in the heat. My 90 degree LH vent doesn’t work at all – back to the drawing board on that one. Lots of noise and clatter from the tailwheel. Our strip is dry and hard with clumps of weeds and occasional sand patches. I had no problems at all, whereas I usually need extra power to get through the sandy parts with the Cygnet. At the end of the strip, the turning circle of the tailwheel is easily enough to turn around and line up in the centre.

So much for slow taxi, not much point in doing any more, so I gave it the gun and high speed down the strip. No problems keeping it lined up, solid as a rock. Same thing in the other direction downwind. No trouble at all, and the wind was a stiff breeze. Next time a bit more power, get to lift-off and get the feel of the thing. Pause for checks. Plenty of strip, wind is right, all gauges working, engine temps are fine – amazing, all switches on, fuel on and plenty, tighten belts, canopy fastened – yes I can reach the brake, one notch of flap, trim to centre for now, all the controls work. Plenty of throttle response and smooth idle. What have I forgotten – that’s enough checking, go for it.

Slowly up with the throttle and it still leaps forward. Veering left – keep it straight. The airspeed indicator works fine, 30 knots that’s about what I expect. Damn I am flying. Too bad – full throttle and away. Climbs out like a champion – this engine is smooth. Easy to handle. Ailerons heavier than I thought, no fore-aft feel yet, just going on airspeed, engine noise and how it climbs. Bumpy and thermals everywhere. That RH CHT is still up but EGT’s OK, oil temps fine, everything seems stable, level off and a quick check of landing areas below – no problems. Wow, the field is way back there. Turn back and a bit disappointed with the speed, seems to settle at about 100 knots. Needs revs and sags if I throttle down a bit. Dummy – flaps up! A bit of a bobble – not used to it – some time since I used flaps. Left wing is heavy, didn’t notice it with flap. Work on that later. Now we’re moving, but 100 knots is as much as I am comfortable with in the rough air. Throttle back 100–80–95–110 – crikey it’s bumpy.

Position for circuit and let down. One notch of flap. Oops, forgot to check the speed first. Bobble up and down again. Turn downwind and lots of turbulence over the hills. Up and down with the throttle. Turn base over my favourite tree, about 80 knots now. Slow a bit and another notch of flap, better this time. Turn to final, slight crosswind. All stable, about 70 knots, could be slower. Nearing the field, slow to 60. Full flap, getting better at this. Fence approaching, heavy sink, throttle up, down again, up again, down and reduce speed to flare. Holds off a bit long, less speed next time, touch down and rattle and roll. Come to a stop at the strip intersection, and turn off easy as pie. Taxi back and get out dripping wet. And next time I’ll have the headset on…